Soften the Environmental Blow With a Green Roof!

Ever since I attended an architectural product luncheon back in 1993, where a Swiss rep was showing his wares – various sizes of the plastic, egg crate-looking modules holding the planting medium used to create planted roofs – and lauding their inherent benefits, I have been wondering why green roofs did not instantly rise to their deserved superstar status in the building world. By no means a novel idea, it seems the acknowledged benefits of green roofs are finally entering a well deserved renaissance, even though it has yet to turn into the kind of sweeping rage that solar panels are enjoying. A visit to the Oregon Convention Center for the recent Green Roof Expo yielded an abundance of green roof approaches, and a plethora of options – products, plants and philosophies. Maybe we’re nearing the point when the world will see the light? Green roofs are too cool to ignore…

There are two – or maybe three – kinds of living roofs, as they are also called – intensive, semi-intensive, and extensive. The intensive kinds are the kind you imagine the Hanging Gardens of Babylon must have been. They require deeper soils, watering, feeding and general maintenance, but are veritable gardens to relax in, and enjoy. The extensive kinds are designed to be ignored, and basically take care of themselves, even through dry summers. For this reason, this is the most common kind and also, in terms of weight, the easiest one to accommodate structurally.

There is an abundance of reasons to include a green roof in your project. In fact, I can’t even think of a reason not to include one. The only potential negative is in the initial cost of a green roof, but even that is not bad, considering the longevity of its life. Living roofs protect exterior roof membranes from damaging UV radiation, extreme temperature fluctuations, accidental punctures and other physical damage. A green roof will outlast a traditional roof 3 times to 1! Which, in other words, renders it both cheaper and less labor intensive (in terms of maintenance) than its more commonplace cousins!

Do you know what the Heat Island Effect is? It is a thermal phenomenon, where the abundance of hard, impermeable surfaces in urban areas absorb heat during the day, and radiates it back into the atmosphere at night. Naturally, our attempts to cool and air condition all these hot buildings and the vehicles driving around among them compound the problem. In larger cities, the temperature can rise as much as 6-10 degrees F, compared to that of the surrounding country side. At its worst, this phenomenon has been known to alter local weather patterns. Installing green roofs on a large scale is a great way to significantly battle the Heat Island Effect. Not only will the green roof insulate and shade the buildings. The fact that plants have a high water content, gives them an ability to balance temperature similar to that of large expanses of water. Through the process of so called evapotranspiration, the plants will return moisture to the atmosphere and subsequently cool the air around them. Brilliant!

Green roofs are also excellent insulators. Traditional Scandinavian sod roofs weighed in the neighborhood of 250 kg/m2. In addition to further compressing the logs, subsequently making the walls less drafty, they helped keep its inhabitants warm and dry, even in a harsh climate. Here in the US, on an 80 degree  day, a  traditional black roof may reach a heat load of up to 180 degrees F! This obviously affects the amount of energy it takes to cool the building’s interiors. A green roof provides a layer of insulation that can reduce heating or cooling costs by between 25 – 50% for the floor directly beneath the roof. Considering that nearly 40% of our energy consumption, as well as 50% of our green house gas emissions stem from the heating and cooling of our buildings, a green roof – regardless of type, makes absolute sense. In fact, to my thinking, it often makes more sense to first invest in the stellar properties of a green roof than it does to install solar panels on an often inadequately insulated structure.

In addition to being a great modifier of heat loss/gain, living roofs are also great sound insulators which, in the right setting, is a significant benefit. In noisy areas such as around heavy industry, airports or major highways, the interior noise pollution can be reduced by up to 10 decibels. 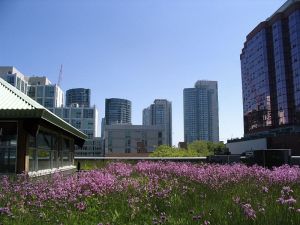 And yes – the water! Here in Portland, the City encourages home owners to disconnect their downspouts. The reason is that many old city infrastructures (including Portland’s) were built to combine storm water and surface run-off with sanitary sewers. After a decent rainfall, up to 75% of all water ends up as surface run-off. If the combined sewage/run-off exceeds the capacity of the sewage treatment plant, overflow valves open and we end up dumping raw sewage directly into our rivers. Living roofs retain a large portion of our annual precipitation and helps alleviate this problem. According to one manufacturer of green roof systems, extensive roofs retain about 72%, while intensive roofs can handle a whopping 93% of a 1-inch rainfall that occurred in a 15- minute interval. This is a tremendous benefit! The roofs also significantly slow down the run-off rate of any excess water, thus preventing flooding. It percolates slowly through the growth medium, and gradually reaches the ground (or the sewer, if you haven’t disconnected yet.) By that time, peak flows from nearby impervious areas have usually subsided, and excessive stress on the municipal sewer system is eliminated. Salmon and others – rejoice!

Still not convinced? Okay, raw economic facts – buildings with green roofs have proven to be very stable and profitable investments. You will save on upkeep and energy costs, and for those of you with apocalyptic tendencies; a green roof will move you that much closer to what is referred to as an autonomous building – i.e. an off the grid building that will still function independently when a civil or natural disaster knocks out societal support systems.

Among several other American cities – notably Chicago – Portland has an aggressive program offering financial, technical and educational incentives to entice builders and home owners to partake in their Green Roof Initiative. You can read more about this quest to “greensulate” our fair city here.

Lastly, aside from the obvious aesthetic benefits inherent in trading a view of acres of gravel with cooling towers, for one featuring a patchwork of mini-meadows and flowering fields of succulents, green roofs lend a helping hand to ailing ecosystems. Brown roofs – a variety of the green roof concept, but using a growing medium specifically sourced to meet a particular biodiversity objective – have been highly successful in fostering growing colonies of many threatened insects, invertebrates and bird species, thus aiding in reversing the depressing trend of looming extinction. And for gardeners who are continuously plagued by deer – an intensive roof garden is your ultimate check mate in the fight against with these beautiful, yet pesky, critters. Except for maybe once a year, on Christmas Eve… ; )

Seriously, all jest aside, what exactly goes into a green roof? Immediately above the roof decking, there will be a water proofing membrane. There will be a layer of insulation, some gravel ballast, as well as a drainage/aeration/water storage system. There will also be a root barrier fabric to protect the membrane, and – depending on what plants are specified – there might also be an irrigation system. Above all that sit the planting modules with the growing medium and finally – the plants. You can either get them as cuttings or as plugs. Unless I’m misinformed,  using cuttings is both more economical, and has a higher success rate of establishment. One vendor at the Green Roof Expo sold bulk cuttings at a price equivalent to $1/sf.

I was excited to find planting modules to fit all needs at the Expo. Whether you have a flat or a sloped roof, there is a product and a way for you to install a living roof. My personal, frivolous favorites are the green walls. They can be attached to any existing wall (on top of a moisture barrier), or you can of course use them to create free standing walls in whatever shape, form, or configuration you desire. Oh, the possibilities… Just imagine having a wall of ever-bearing strawberries within arms-length of your favorite garden reading spot! Or a tapestry of colorful, sculptural succulents to admire.

In light of the abundance of benefits inherent in green roofs, it is really difficult to embrace just about any other option. In a near future, harvesting and collecting rain water will be a critical component of our survival, even here in Portland (even though that might seem a strange proposition after the long weeks of rain we’ve just had). We are already seeing the effects of what global warming and over-consumption does to both our marine and land-locked environments. Implementing green roofs is a fool-proof beneficial tool, capable of inching us toward a solution to both problems. Green roofs meet one of the most essential conditions of sustainable development – the reconciliation of economy and ecology. In a world of measuring and balancing embodied energy v/s performance, human convenience v/s resource depletion, and local production requirements v/s global trade economics, green roofs seem an amazingly simple answer to so many of our self-imposed problems. In fact, it’s a no-brainer!

I was born and raised in Sweden, By now, I have lived almost as long in the United States. The path I’ve taken has been long and varied, and has given me a philosophical approach to life. I may joke that I’m a sybarite, but the truth is, I find joy and luxury in life’s simple things as well. My outlook on life has roots in a culture rich in history and tradition, and I care a great deal about environmental stewardship. Aesthetically, while drawn to the visually clean, functional practicality and sustainable solutions that are the hallmarks of modern Scandinavia, I also have a deep appreciation for the raw, the weathered, and the worn - materials that tell a story. To me, contrast, counterpoint, and diversity are what makes life interesting and engaging. Color has always informed everything I do. I’m a functional tetrachromat, and a hopeless plantoholic. I was originally trained as an architect working mostly on interiors, but soon ventured outside - into garden design. It’s that contrast thing again… An interior adrift from its exterior, is like a yin without a yang. My firm conviction that everything is connected gets me in trouble time and time again. The world is a big place, and full of marvelous distractions, and offers plentiful opportunities for inquiry and exploration. I started writing to quell my constant queries, explore my discoveries, and nurture my curiosity. The Creative Flux was started in 2010, and became a catch-all for all kinds of intersecting interests. The start of Flutter & Hum at the end of 2013 marks my descent into plant nerd revelry. I occasionally contribute to other blogs, but those two are my main ones. For sure, topics are all over the map, but then again - so am I! Welcome to my blogs!
View all posts by annamadeit →
This entry was posted in Client Education, Cool building materials, Environment, Gardening and Landscaping, Green Living, On Building, On Design and tagged brown roofs, Building, climate change, economy, Energy, environment, extensive, Green Roof Initiative, green roofs, Green Technology, Heat Island Effect, intensive, Landscape design, storm water. Bookmark the permalink.

7 Responses to Soften the Environmental Blow With a Green Roof!