The Dirty Dozen and the Clean Fifteen

I just started reading the classic “Silent Spring” by Rachel Carson. The book was first published in 1962, and became the spark that ignited the entire Green Movement. As a result of the newly awakened debate, a toxin known as DDT was outlawed in the United States, right before it had time to totally eradicate the bald eagle population. (It is still used in some tropical countries to battle malaria.) Only recently were the National Birds sufficiently recovered in numbers to be removed from the Endangered Species list.

DDT, however, was only one to be followed by thousands of others, and to this day, chemicals are being generously applied to the food we eat. Interestingly, synthetic pesticides were first developed during WWII and intended for chemical warfare. Humans learned to manipulate the carbon atom into all kinds of “unnatural” configurations to battle each other. As the new substances were tested on insects, another area of use was realized. The rest is history. Today, every living thing on this Earth carry evidence of these artificial molecular structures. Our bodies can’t process these foreign elements, and we probably won’t really know what kind of damage they do to our systems until it is too late.

Sometime in the mid-90’s, I saw a PBS Bill Moyers exposé called “In Our Children’s Food”. Among other things, it explored the relationship between pesticides and children. This is where I first learned that your standard carrot contains over 70 different chemicals! The best option to avoid it all, is of course to buy organic produce, but for the instances when that is not possible, it is good to know what your “good options” are. So when my good friend Hollye sent me this excellent list, I wanted to pass it on to as many as possible. Keep in mind that the “safe” levels, as designated by the EPA, the FDA and the USDA are calculated on adults and do not take into account the smaller bodies of children. I think I’m going to print this list out and keep it in my shopping bag… 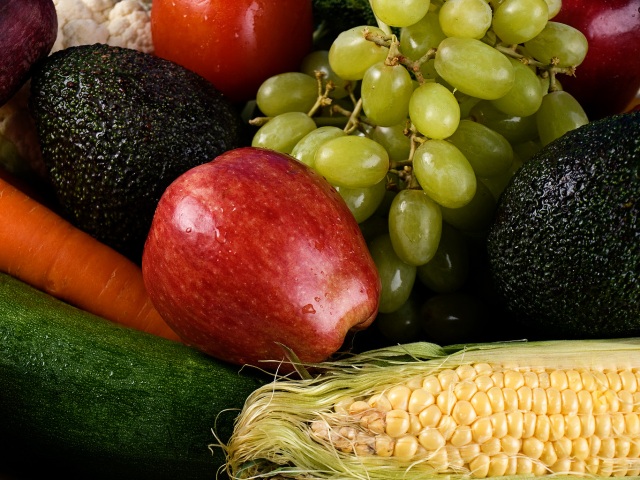 “It’s critical people know what they are consuming,” the Environmental
Working Group’s Amy Rosenthal said. “The list is based on pesticide
tests conducted after the produce was washed with USDA high-power
pressure water system. The numbers reflect the closest thing to what
consumers are buying at the store.”

The group suggests limiting consumption of pesticides by purchasing
organic for the 12 fruits and vegetables.

“You can reduce your exposure to pesticides by up to 80 percent by
buying the organic version of the Dirty Dozen,” Rosenthal said.

Not all non-organic fruits and vegetables have a high pesticide level.

Some produce has a strong outer layer that provides a defense against
pesticide contamination. The group found a number of non-organic
fruits and vegetables dubbed the “Clean 15” that contained little to
no pesticides.

What is a pesticide?

A pesticide is a mixture of chemical substances used on farms to
destroy or prevent pests, diseases and weeds from affecting crops.
According to the USDA, 45 percent of the world’s crops are lost to
damage or spoilage, so many farmers count on pesticides.

The Environmental Protection Agency, the FDA and the USDA work
together to monitor and set limits as to how much pesticide can be
used on farms and how much is safe to remain on the produce once it
hits grocery store shelves.

I was born and raised in Sweden, By now, I have lived almost as long in the United States. The path I’ve taken has been long and varied, and has given me a philosophical approach to life. I may joke that I’m a sybarite, but the truth is, I find joy and luxury in life’s simple things as well. My outlook on life has roots in a culture rich in history and tradition, and I care a great deal about environmental stewardship. Aesthetically, while drawn to the visually clean, functional practicality and sustainable solutions that are the hallmarks of modern Scandinavia, I also have a deep appreciation for the raw, the weathered, and the worn - materials that tell a story. To me, contrast, counterpoint, and diversity are what makes life interesting and engaging. Color has always informed everything I do. I’m a functional tetrachromat, and a hopeless plantoholic. I was originally trained as an architect working mostly on interiors, but soon ventured outside - into garden design. It’s that contrast thing again… An interior adrift from its exterior, is like a yin without a yang. My firm conviction that everything is connected gets me in trouble time and time again. The world is a big place, and full of marvelous distractions, and offers plentiful opportunities for inquiry and exploration. I started writing to quell my constant queries, explore my discoveries, and nurture my curiosity. The Creative Flux was started in 2010, and became a catch-all for all kinds of intersecting interests. The start of Flutter & Hum at the end of 2013 marks my descent into plant nerd revelry. I occasionally contribute to other blogs, but those two are my main ones. For sure, topics are all over the map, but then again - so am I! Welcome to my blogs!
View all posts by annamadeit →
This entry was posted in Green Living, Health and Safety and tagged environment, EPA, FDA, food, health, pesticides, USDA. Bookmark the permalink.

1 Response to The Dirty Dozen and the Clean Fifteen