IKEA has no doubt opened minds and wallets of millions of nesting Americans. I’m totally cool with that. What I do have a problem with, however, is that because of IKEA’s populistic prominence, Swedish meatballs and cinnamon rolls have now become completely – and I mean COMPLETELY – misrepresented. I will leave those weird, non-descript little meaty things for another post, and deal with the cinnamon rolls first. Truthfully, I’d be hardpressed to tell the difference between the IKEA rolls and the slippery sweet, over-inflated sticky buns sold by mall-shops type Cinnabon. I wouldn’t even be all that surprised if they shared the same distributor… But don’t despair – you too can have one… or two… or three………

Golden brown with a sugary crunch, they are about 1/3 of the size of the industrial ones you can buy. The glossy surface is due to brushing them with an egg-wash, which also helps secure the pearl sugar right before you bake them.

A real, Swedish ‘bulle’ as it is called, is a thing of beauty. Unlike the Cinnabon type bun it is not filled with air, but offers a nice, chewy resistance as you bite into it. The pearl sugar on top adds a bit of sweet, crunchy texture, but overall they are not too sweet. The most prominent thing you will notice upon your first bite, is the flavor. Sure, there is usually cinnamon in there, but you will recognize that other intensely aromatic spice as cardamom. This, in my humble opinion, is what will propel you into another dimension. Whomever first thought of that was a culinary genius!

First things first. Get out your trusty machine of choice. Mine is a treasured, old Electrolux ‘Assistent’ inherited from my Aunt Inga. No doubt, it has served us both well.

Making these rolls takes a little time, but is really not that difficult. You need to let the dough rise twice – this is what takes the most time. In the books, they tell you to let it rise until it has doubled in size. This is important, as it is the rising of the dough that is going to give you that nice, moist, chewy texture. I usually make the dough the night before and let it rest overnight. That way, I don’t have to build my day around it. The basic recipe I’m using here is from the book “Sju sorters kakor” by ICA bokförlag – a book most Swedes seem to have in their posession. The dough typically doesn’t vary much, but you can be as creative as you want with the filling. The standard fillling is butter, sugar and cinnamon, but I like to add almond paste to that as well. I whip it into the butter for an easily spreadable paste, and then dust it with sugar and cinnamon. For variety, I have used lemon curd, apple sauce, and vanilla cream. I’m sure you can come up with other nice alternatives, depending on mood. The experimentation is the best part. Although I’m sure someone out there must have thought about it before me, the part about adding almond paste once when the opportunity presented itself turned out to become the new standard in our family. So far, it has been pretty hard to beat!

Eggwash made from one egg, for brushing onto the buns.

Pearl sugar, and/or chopped nuts to decorate with.

Melt the butter, and add the milk. Heat until lukewarm, but make sure it doesn’t get beyond your body temperature. If it does, you will kill the yeast, and the dough won’t rise. I usually use the dry yeast, as it is much easier to find here in the US. The dry yeast is also a bit more forgiving, but even so, be careful not to let it get too warm. To be on the safe side, I often just melt the butter and add the milk with no additional heating. It works just as well, in my experience.

Add salt, sugar, and cardamom. Add the dry yeast to about 2/3 of the flour and mix. Pour the flour and yeast mix into the liquid and work the dough so that it is smooth and elastic. Add additional flour, but save about half a cup for baking. The dough is finished when it no longer sticks to the walls of the bowl. Powder a little flour over the dough, cover with a moist kitchen towel, and let sit in a draught-free place until it has about doubled in size.

If properly risen, the dough will deflate when you puncture it. Give it a few more whirls in the processor, to “compress it” again, before plunking it onto your table.

Knead the last bit of flour into the risen dough. When it is perfect it is still soft and pliable, but not so sticky that you can’t get it off your hands and table in one piece. If it’s still too sticky once you’ve ran out of flour, don’t worry about adding a little more – it’s not a precise science.

Work the dough for a couple of minutes in the bowl, and then pour it out on a floured surface. Knead in the rest of the flour. Consider it done when it no longer sticks to either the surface or your hands. To test it, you can make a cut in it with a knife. The dough should have a nice, even porosity. If the pores look like large bubbles, you will need to knead it a little longer. When it’s done, divide the dough in half. Roll half of it it out at the time, or it gets hard to manage.

Use a rolling pin to roll the dough out into a big, thin rectangle. Spread your room-tempered butter (or whatever you are using) over half the surface. If you’re going traditional, sprinkle sugar and cinnamon evenly over the butter. Then fold the other half over and match up the edges as best you can.

Cut the dough into strips, about an inch wide.

Not sure how well you can tell from this picture, but I’m trying to show how much sugar to sprinkle on top of the butter.

Twist the strips. You will notice that they will stretch out quite nicely.

Wrap the twisted strip of dough around your hand once or twice. Tuck the end underneath, and plunk it down on the cookie sheet. Use baking paper or silpat baking sheets to prevent them from sticking. Let them rest under a towel in a warm place for another hour or so, before brushing with the egg wash. 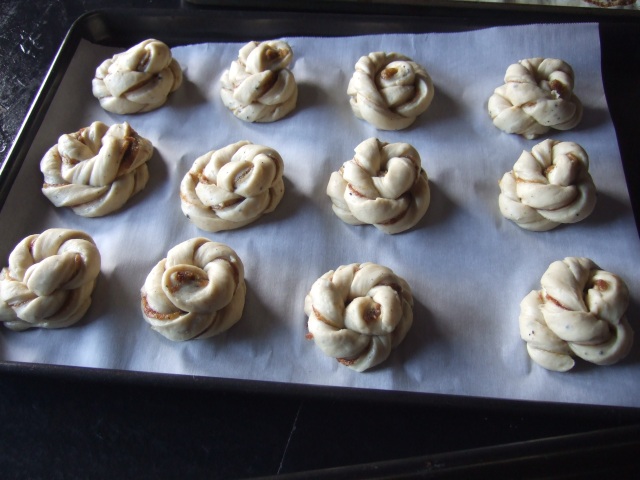 When they look like this, all you have left to do is brush them with the egg-wash, decorate with the pearl sugar, and bake them. Hooray!

Brush the egg wash onto the rolls. This will give them that golden brown sheen.

Sprinkle them with pearl sugar which you might be able to find at IKEA. Chopped hazel nuts are good too!

This is how the pearl sugar package I used looks. **UPDATE: You can no longer find this at IKEA. I’m guessing a good specialty baking shop might have it, or find it online.

Whip the egg and use a brush to coat the rolls with it. If you have pearl sugar (this, you can usually find at IKEA) sprinkle some on top. You can also sprinkle some chopped nuts on it. Bake on the middle rack for 8 – 10 minutes at 250˚C/475˚F in a regular oven (or at 225˚C/425˚F with convection). My kids love them warm out of the oven, served with a glass of milk! I guess that will officially make me a “bull-mamma”, which is a somewhat derogatory Swedish term for someone who clearly does not have the best interest of her kids at heart in that she feeds them too much sugary baked goods. But, quite frankly, I don’t care. Since I only bake them a couple of times a year, I think that my occasional excesses are probably okay. And, as opposed to those frosted, fluffed up monstrosities from IKEA and Cinnabon, at least here I know what I’m serving. Enjoy!

I was born and raised in Sweden, By now, I have lived almost as long in the United States. The path I’ve taken has been long and varied, and has given me a philosophical approach to life. I may joke that I’m a sybarite, but the truth is, I find joy and luxury in life’s simple things as well. My outlook on life has roots in a culture rich in history and tradition, and I care a great deal about environmental stewardship. Aesthetically, while drawn to the visually clean, functional practicality and sustainable solutions that are the hallmarks of modern Scandinavia, I also have a deep appreciation for the raw, the weathered, and the worn - materials that tell a story. To me, contrast, counterpoint, and diversity are what makes life interesting and engaging. Color has always informed everything I do. I’m a functional tetrachromat, and a hopeless plantoholic. I was originally trained as an architect working mostly on interiors, but soon ventured outside - into garden design. It’s that contrast thing again… An interior adrift from its exterior, is like a yin without a yang. My firm conviction that everything is connected gets me in trouble time and time again. The world is a big place, and full of marvelous distractions, and offers plentiful opportunities for inquiry and exploration. I started writing to quell my constant queries, explore my discoveries, and nurture my curiosity. The Creative Flux was started in 2010, and became a catch-all for all kinds of intersecting interests. The start of Flutter & Hum at the end of 2013 marks my descent into plant nerd revelry. I occasionally contribute to other blogs, but those two are my main ones. For sure, topics are all over the map, but then again - so am I! Welcome to my blogs!
View all posts by annamadeit →
This entry was posted in Food and Drink Recipes, Scandinavia and tagged Bullar, cardamom, cardamom rolls, cinnamon, recipe, rolls, Swedish, Traditional. Bookmark the permalink.