Rubus lineatus – not quite on the wild side… 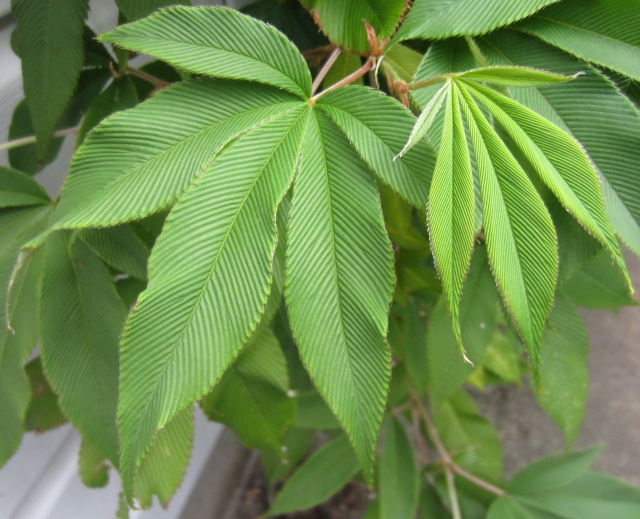 You can always tell the pot smokers from the non-users the first time they as new visitors walks up our driveway. At a particular point in this short journey, the hemp users invariably jump, which always makes me giggle because it is so indisputably revealing. It is true – there are some very real similarities that are bound to make any horticulturally inclined citizens look twice – its tall stature for one, and the graceful layers of palmate leaves. The plant afficionados always catch themselves and turn events around by saying something along the lines of: “Oh, you have a Rubus lineatus! Yes, aren’t those wonderful!”, they say approvingly. I can only agree. The first time I ever saw one was at the Lan-Su Garden here in Portland. Mouth agape, I had the wherewithall to photograph the sign identifying it along with the fabulous leaves themselves before I mesmerized stumbled out, but for a long while after that, my steaming hot desire was left unsatiated. That is, until one day I leisurely wandered about in Garden Fever – a great little nearby nursery where I always make an excuse to blow off some time whenever opportunity arises. There it was, a single pot semi-hidden in a corner behind some other pots displaying other plants. For a moment, I suspected that a fellow shopper must have hidden it there while planning for a later pick-up, but that this sneaky maneuver had done nothing to deflect my hawk-eye vision. The shopper in question was doubtlessly nearby, cursing his misfortune, as I did a little victory dance in sheer delight. But no – no one in sight looked even a tad bit dismayed, so I think I was just particularly lucky that day.

If I have to be specific, it was the finely pleated leaves that completely floored me when I first saw it. They are unlike any others!

Supposedly hardy to Zon 9, the first couple of winters I had it, it died back completely. I was chewing on my nails until I finally detected new life emerging around the crown as the days grew longer and warmer. Whew! I decided to move it to the east side of the house, into an inverted corner where I imagined it would benefit from the additional shelter from icy winds. Silly perhaps, as it is both a Himalayan plant, and a relative of the blackberry. I mean, really – who am I kidding? Not sure why I worried so much… Granted, that last winter was an unusually mild one, but it stood tall, kept most of its leaves, and now reaches the eaves of our house. 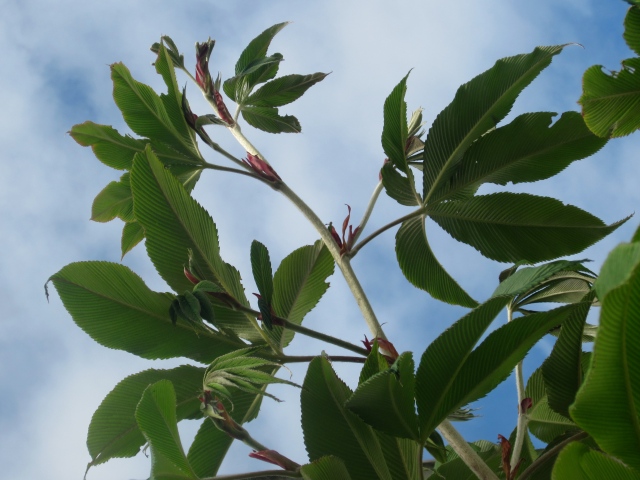 You can clearly see the reddish sheaths from which new leaves emerge.

In terms of care, it is the perfect plant for a lazy gardener. It gets about a half day of direct sun, I don’t water it much, and I amended the soil somewhat at planting time, but have not fertilized it since. It simply lives at its own pace. I didn’t expect it to live quite that well – it now effectively screens the gas meter, which was unintentional. (Not that I mind…) But, I cross my fingers and hope that any future Pacific Power Company officials will have empathy for my addiction, and do what nearly everyone else does, which is look wide-eyed in admiration and exclaim; “Wow, what an awesome plant!”

Before they unfold, the leaves are beautifully silvery. In this close-up, you can also see how the edges of the serrated leaves are deliciously dipped in the same reddish brown of the aforementioned sheaths. The far-away effect is that each leaf has an extremely attractive thin, dark outline. 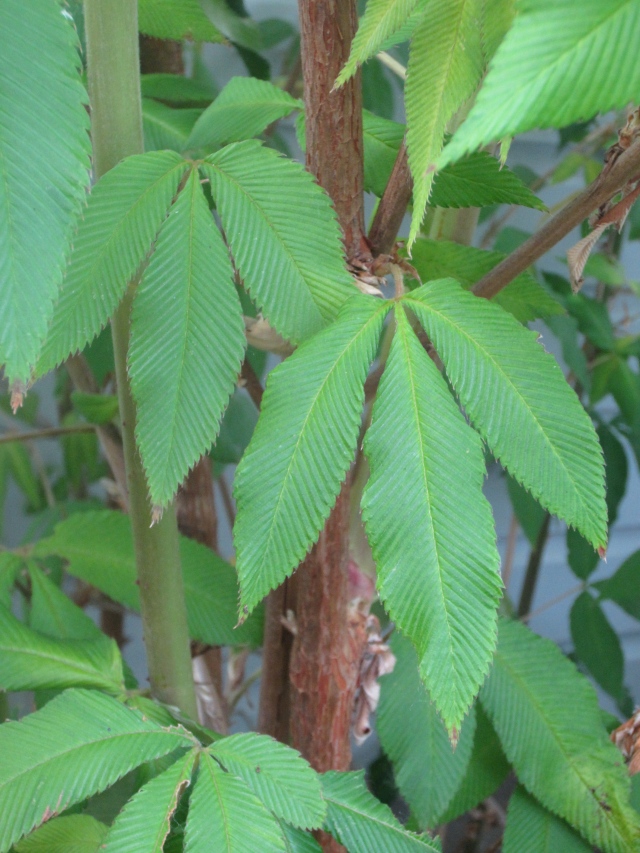 The stems have that same reddish brown color, which sets of the leaves beautifully! 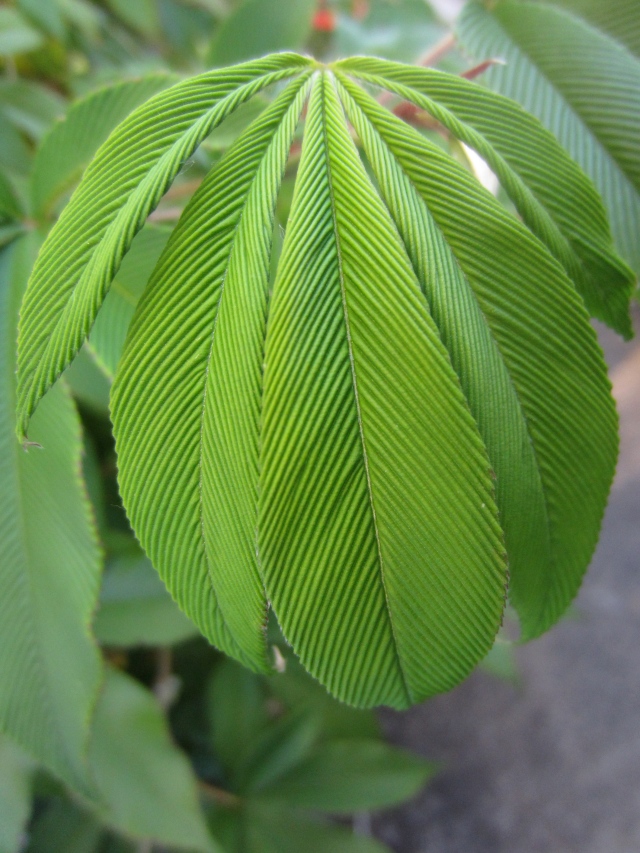 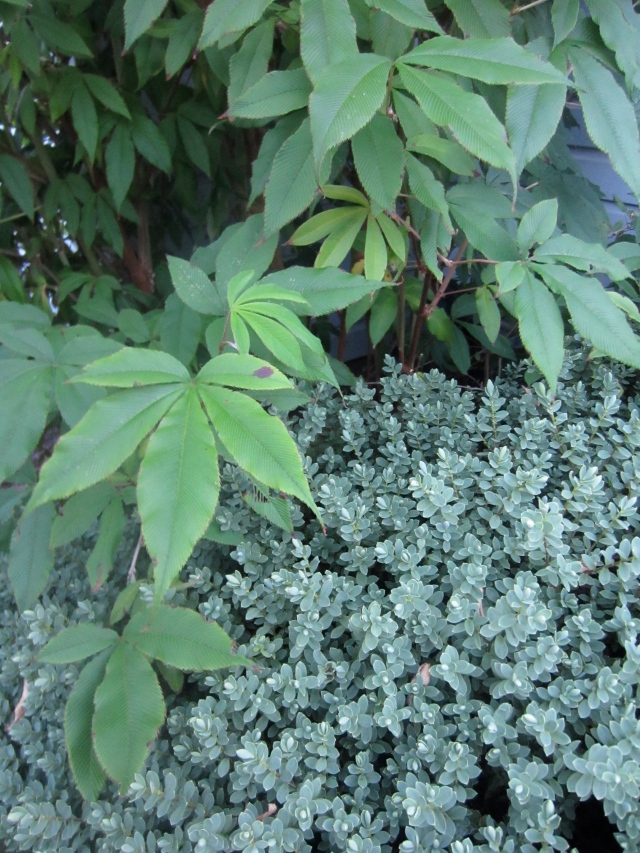 I enjoy the textural pairing with a Hebe glauca which also helps bring out a bluish cast to the leaves.

Supposedly, Rubus lineatus produces edible berries resembling blackberries, except orange. I haven’t yet seen any evidence of this on my shrub, but all good things come to those who wait… right?

I was born and raised in Sweden, By now, I have lived almost as long in the United States. The path I’ve taken has been long and varied, and has given me a philosophical approach to life. I may joke that I’m a sybarite, but the truth is, I find joy and luxury in life’s simple things as well. My outlook on life has roots in a culture rich in history and tradition, and I care a great deal about environmental stewardship. Aesthetically, while drawn to the visually clean, functional practicality and sustainable solutions that are the hallmarks of modern Scandinavia, I also have a deep appreciation for the raw, the weathered, and the worn - materials that tell a story. To me, contrast, counterpoint, and diversity are what makes life interesting and engaging. Color has always informed everything I do. I’m a functional tetrachromat, and a hopeless plantoholic. I was originally trained as an architect working mostly on interiors, but soon ventured outside - into garden design. It’s that contrast thing again… An interior adrift from its exterior, is like a yin without a yang. My firm conviction that everything is connected gets me in trouble time and time again. The world is a big place, and full of marvelous distractions, and offers plentiful opportunities for inquiry and exploration. I started writing to quell my constant queries, explore my discoveries, and nurture my curiosity. The Creative Flux was started in 2010, and became a catch-all for all kinds of intersecting interests. The start of Flutter & Hum at the end of 2013 marks my descent into plant nerd revelry. I occasionally contribute to other blogs, but those two are my main ones. For sure, topics are all over the map, but then again - so am I! Welcome to my blogs!
View all posts by annamadeit →
This entry was posted in Cool plants, Gardening and Landscaping and tagged Curb appeal, foliage, garden, leaves, Plants, Rubus lineatus, Shrubs. Bookmark the permalink.

19 Responses to Rubus lineatus – not quite on the wild side…