Humbled by a warm body in a cold world

As life and work has commanded most of my attention for the last few months, it’s been a while since I had a chance to write. But the other day, I saw the most astounding thing that made me marvel at the limits of our human perception. Or, maybe I should revise that generalizing blanket statement to encompass only my own pre-concieved, discriminating ideas of the world around me. This lesson, I simply have to share…

My orange house-tiger staring accusingly out the window, wondering who in the world did this to his stomping grounds…

A couple of weeks ago, temperatures dropped far below the usual, and big, fluffy snow flakes quickly covered the ground. In usual Portland fashion when we get a little snow, everything came to a standstill – schools closed, workers were released early, businesses shut their doors, and the roads were quickly littered with the remnants of driving mishaps and abandoned cars. Anyone who has ever lived in areas where wintry conditions are the norm this time of year, will no doubt snicker condescendingly at this, but it is true. Portlanders just aren’t generally prepared for this sort of thing, and adventurous gardeners venturing out of their climate zone are even less so. Although I vainly tried to cover up my most tender darlings in anticipation of the Arctic Blast we experienced in early December, I’m pretty sure I lost a few of them despite my smothering efforts. So this time around I resigned to the fact, and instead focused on keeping the bird feeders stocked with seeds and suet cakes, and the hummingbird feeders full. Because it was so cold, and the sugar water kept freezing, I alternated my two feeders, so that one was always thawing while they were feeding out of the other.

By the following morning, the snow had been covered  by a layer of ice, and everything in the garden was pressed to the ground under the weight. The bamboo was practically folded double. Crouching down under it evoked the experience of a standing under a weeping willow. 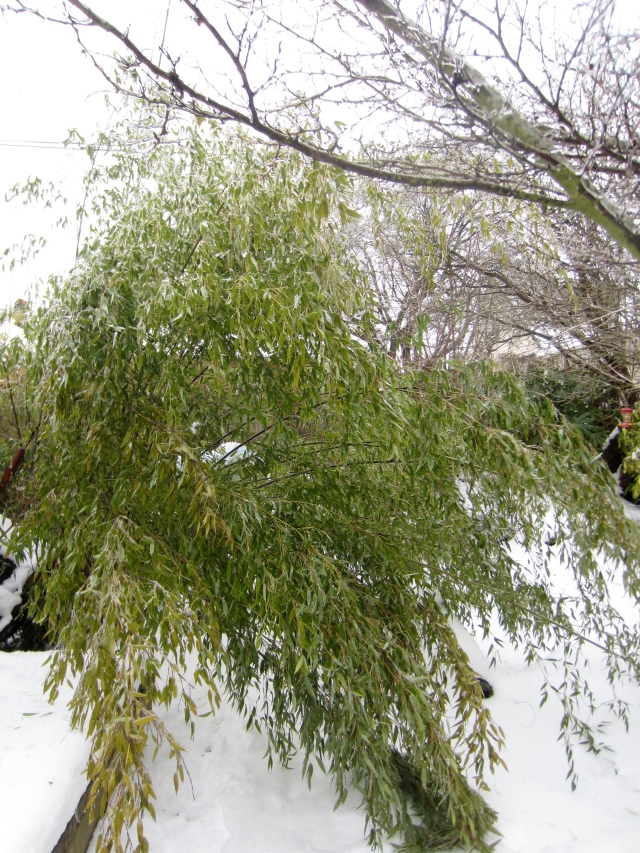 The normally stately, upright black bamboo submissively bent to the powers that be. 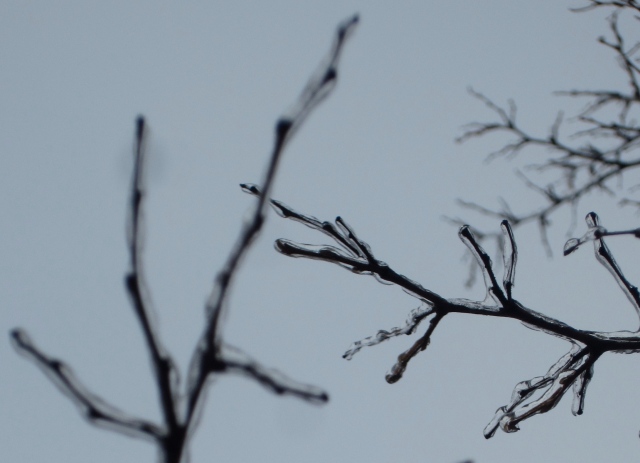 Every little twig had a coating of ice. As the wind stirred, a glassy, clinking sound emanated from the branches. I kept wishing for the sun to break through the cloud cover, but it never did. That would have been a fantastic sight – a sparkling fairytale landscape amidst the destruction!

By mid-day, as the temperatures rose, the air filled with the sounds of melting snow, dripping water and crashing ice. There was a sense of relief – a sense that was amplified by the chirping and chattering of birds that suddenly seemed to have re-emerged. When it was at its coldest, it was awfully quiet out there… I was outside surveying the storm damage, when I suddenly saw it by the hummingbird feeder. A small bird – definitely not the humming kind – kept swooping down to the feeder, trying to flap its wings to keep itself still in the air so it could drink from the yellow plastic flowers.  Invariably, it managed to stay level with the flower for a second or two, before it was pulled below by its own weight. Not one to give up, it kept trying, again and again. Such perseverance! Fascinated, I stood still and just watched. My thoughts went to the Olympic athletes, whose gritty determination, indomitable spirit, and steely perseverance have been keeping me spellbound and averted any cabin fever during the storm. Then I went inside to get my camera. The little bird was gone when I came back, and for a while I lamented that nobody would ever believe me when I retold what I’d seen. But it had apparently just taken a break, as soon afterwards it reappeared. The photos I got weren’t great, but you get the idea. According to my Birds of Oregon Field Guide the closest look-alike I found indicates that this tiny little overachiever might be a Ruby-crowned Kinglet, but I’m not sure. If you can identify this bird despite the mediocrity of the photos, please let me know what it is – I would love to know!

Here is our little hero… You can see him contemplating his next move in the lower right hand corner.

What was that? … It’ll be easier if I approach it from above…?

Okay, here we go! Are you watching?

A good teacher makes all the difference in the world. I’m looking forward to seeing the progress of the little bright-eyed, fuzzy, determined student under the coaching and guidance of this pro!

I’m humbled by this little bird, which keeps trying so hard to become a hummingbird. I also feel very arrogant for assuming that only humans try to better themselves and achieve a greater purpose. Well, today I got my own ignorance shoved down my throat, and I think I’m better for it. Go figure…

I was born and raised in Sweden, By now, I have lived almost as long in the United States. The path I’ve taken has been long and varied, and has given me a philosophical approach to life. I may joke that I’m a sybarite, but the truth is, I find joy and luxury in life’s simple things as well. My outlook on life has roots in a culture rich in history and tradition, and I care a great deal about environmental stewardship. Aesthetically, while drawn to the visually clean, functional practicality and sustainable solutions that are the hallmarks of modern Scandinavia, I also have a deep appreciation for the raw, the weathered, and the worn - materials that tell a story. To me, contrast, counterpoint, and diversity are what makes life interesting and engaging. Color has always informed everything I do. I’m a functional tetrachromat, and a hopeless plantoholic. I was originally trained as an architect working mostly on interiors, but soon ventured outside - into garden design. It’s that contrast thing again… An interior adrift from its exterior, is like a yin without a yang. My firm conviction that everything is connected gets me in trouble time and time again. The world is a big place, and full of marvelous distractions, and offers plentiful opportunities for inquiry and exploration. I started writing to quell my constant queries, explore my discoveries, and nurture my curiosity. The Creative Flux was started in 2010, and became a catch-all for all kinds of intersecting interests. The start of Flutter & Hum at the end of 2013 marks my descent into plant nerd revelry. I occasionally contribute to other blogs, but those two are my main ones. For sure, topics are all over the map, but then again - so am I! Welcome to my blogs!
View all posts by annamadeit →
This entry was posted in Gardening and Landscaping and tagged aspiring, bird, feeder, garden, hummingbird, ice storm, imitating, snow, winter. Bookmark the permalink.