My 13-year old lamented the other day that he didn’t know what he wants to do with his life. He was concerned that he doesn’t know what to study in college. “Well, you have plenty of time to figure that out”, I said, whereupon he answered that it would be nice to know now, so he can prepare for his future college studies, once he starts high school. I have to say that I completely and wholeheartedly feel his pain. It took me a long time to figure out what I wanted to do, and in some ways, I’m still searching. Mind you, I was also impressed that he was already thinking ahead. The only advice I could offer him was that he needs to figure out what he really, really loves to do, and then figure out a way to do that. That way, he would always be happy, at peace, and very rarely feel trapped in a life where he dreads going to work.

The above conversation made me think that it was time to write this post. During my recent trip back to Sweden, my mother and I took fun little outings between our work sessions on reconfiguring her kitchen. One place we visited was the renowned Husaby church – its foundations laid in the early 1100’s CE. By now, only the towers remain from the original building. They predate even the earliest laws of what was to eventually become Sweden. This is historically very rich territory, where seemingly every turn in the road can tell centuries worth of stories of battles, bloodshed, sacrifice and triumph.

Husaby church – a place that has seen the waves of history pass by for a millennium. 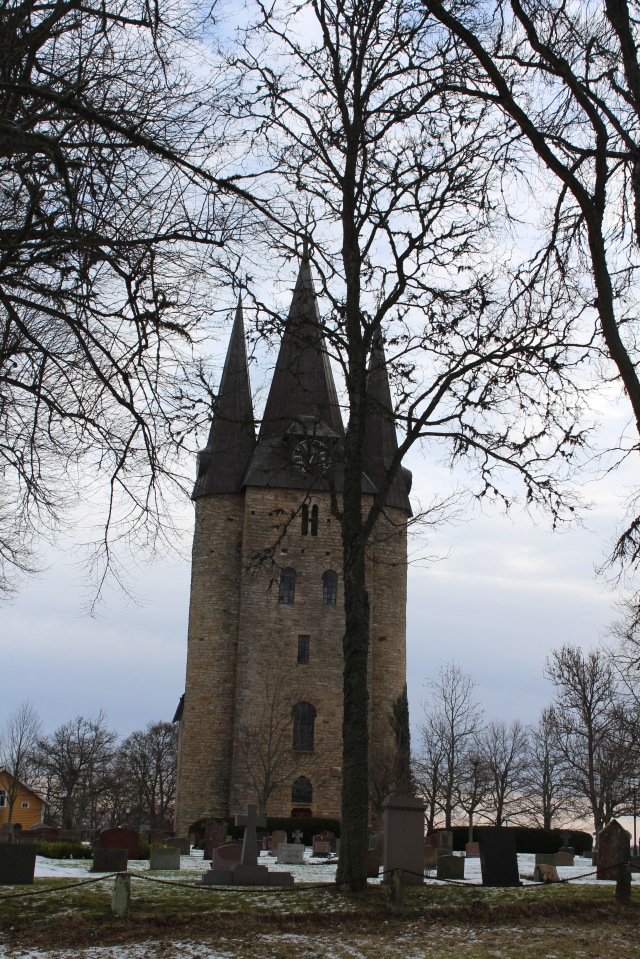 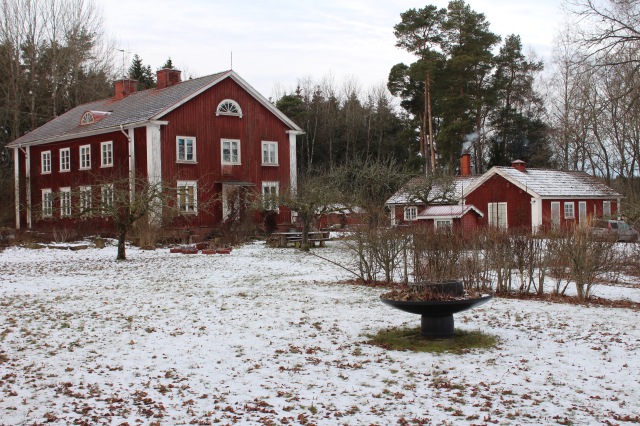 A few stone throws from the church, there is a rather stately red building, next to a smaller, one-story house, also painted the ubiquitous Falu red. It is in this smaller building, that magic happens. Mom, of course, knew that, and this is where she was taking me. 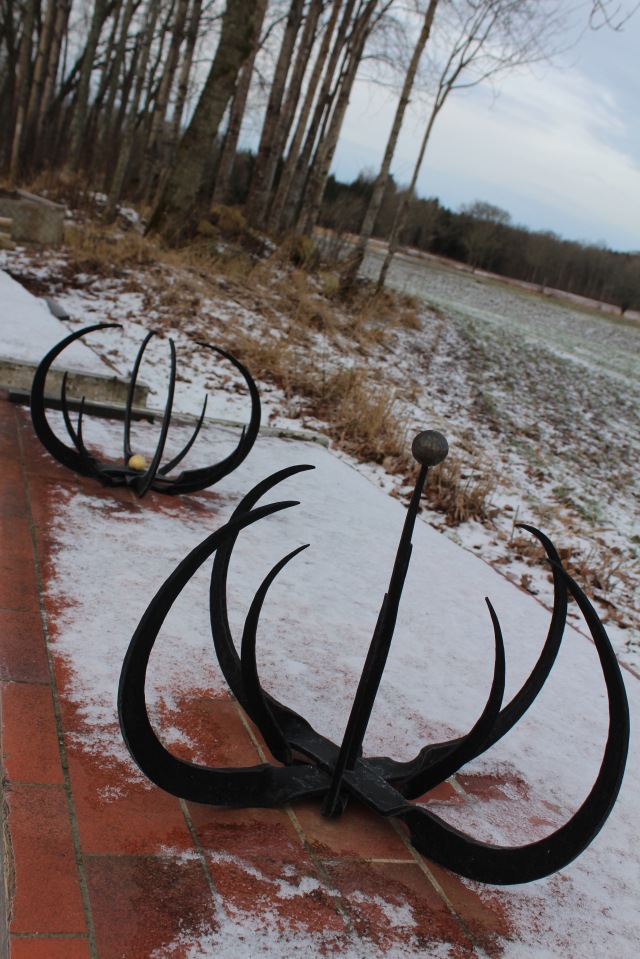 Along the walkway up to the door, black silhouettes stand out against the snow. 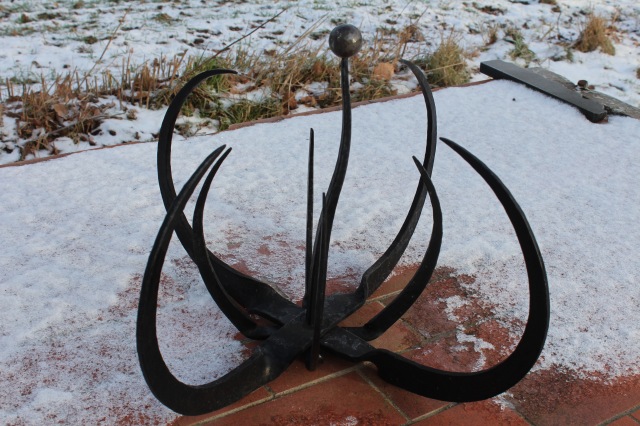 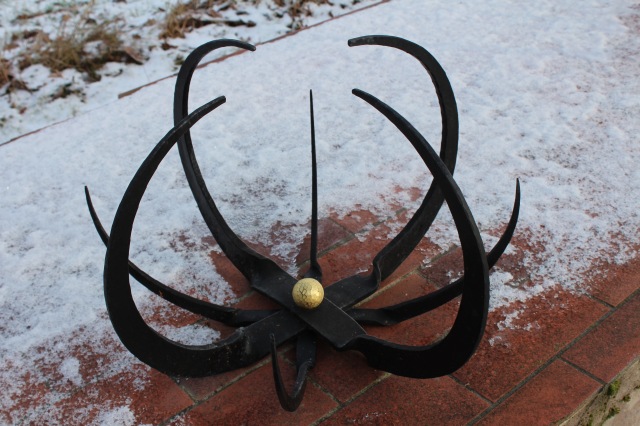 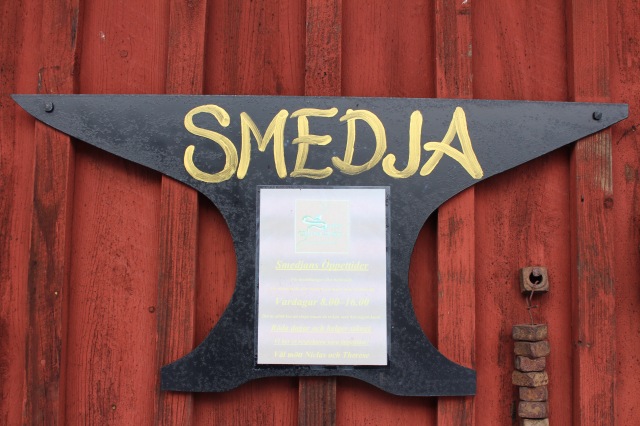 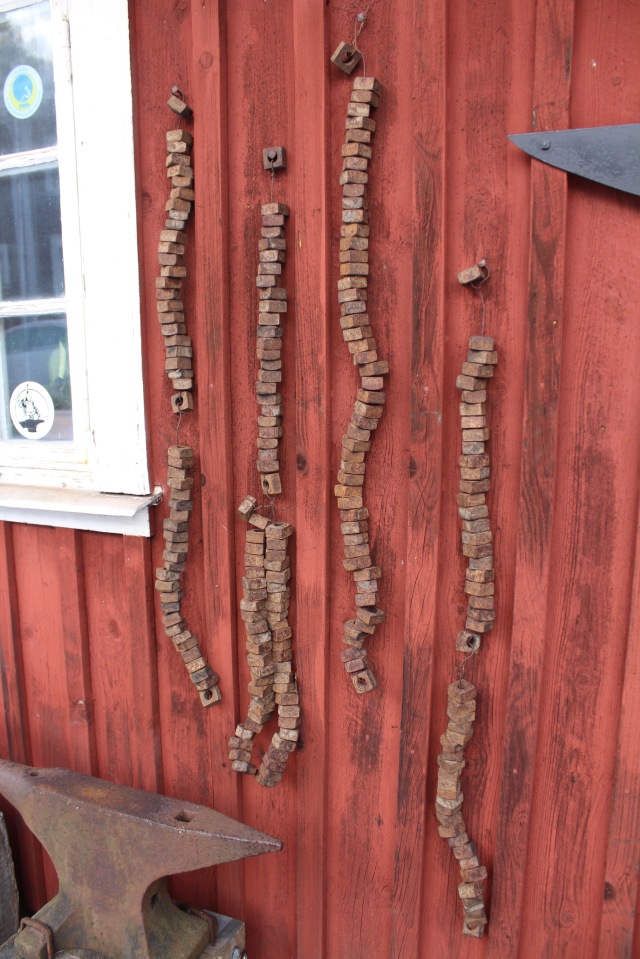 I loved the many square nuts that were threaded onto wires and hung on the wall. This was exciting! We entered. 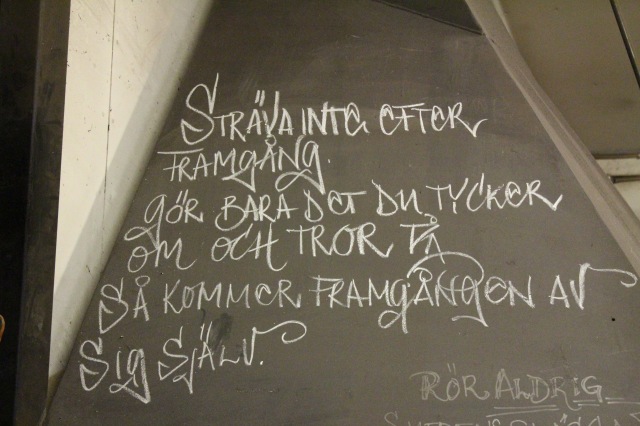 The first thing you see upon entering is a beautifully scripted message, chalked on the iron hood above the fire. It reads: “Strive not for success. Only do what you like and believe in, and success will come by itself.” Whomever dwells here – I like her already! 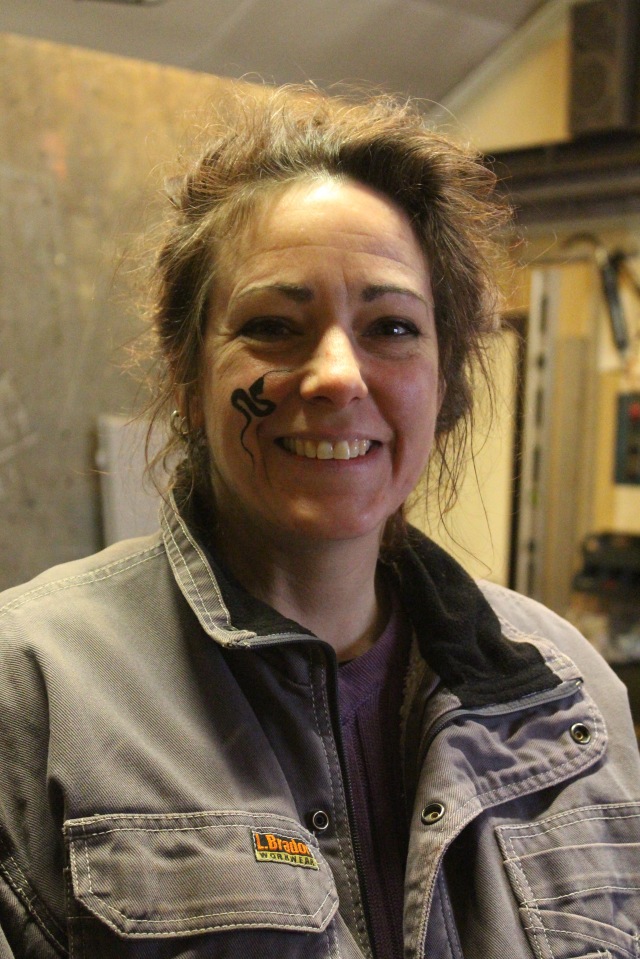 Soon enough, we met her – the immensely talented la Doyenne de Feu herself – Master blacksmith Therese  Engdahl. She and her husband Niclas own and operate the forge, and do all design and execution themselves. While she does more decorative arts, he makes custom commissions for buildings. We saw a beautiful range hood of his in Kvänum – one of the kitchen showrooms we visited. We took up far too much of Therese’s time ooh-ing and aah-ing over everything, and asking a thousand questions. I enjoyed every minute of it. Mom had been there several times before, and knew that seeing this, and meeting Therese would make my day. I thank her for that – it did. Mom had also brought my oldest here once when he was 11, or so. Together, he and Therese collaborated on a design for a wedding gift that was to merge two cultures. That summer, he had asked her if he could intern, and learn from her. Therese offered plenty of good advice about how to get prepared for such an internship. My son, who is now 16, took what she said to heart, and is now enrolled in a polytechnic high school, and has at least some access to the kind of learning she mentioned. Clearly, I wasn’t the only one in my family who gets excited about this ancient craft.

I think we humans have a kind of primordial need to create. The media vary, but the immense satisfaction in the ability to create something is constant. When that yearning goes unmet and un-nurtured, we turn into a society of cranky consumers, generally lacking the ability to discern quality from crap – because we no longer know how things work, or how to do things. Everything can be bought, and just about everything is imported from industrially developing countries where labor is cheap, and things can still be produced cheaply (on several levels). Ancient trades, techniques, tools and traditions are lost in the process. Sweden isn’t quite as far gone in its cultural decay as the US – yet, but they are both on a slippery downward slope. At some point, I imagine, it will become evident that we have undermined our own existence by not giving our offspring the ability to create and sustain the tools for their own survival. The power balance of the world will weigh heavily toward countries that still value ability. But, I digress… back to the fabulous Therese! 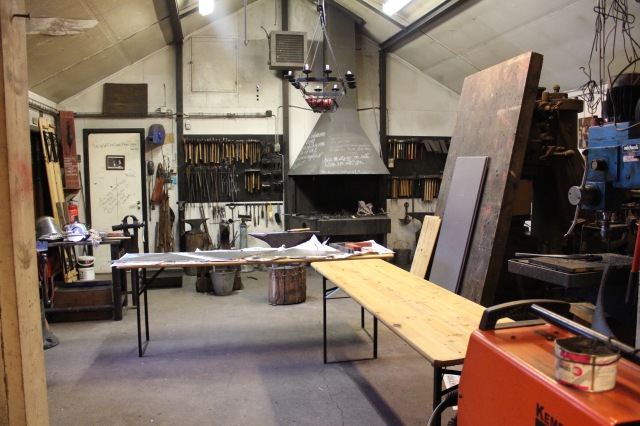 Here’s an interior shot of the shop. So beautifully spacious, airy, well lit and organized, and clean. Not at all the kind of sooty look the idea of a stereotypical smithy might conjure up. 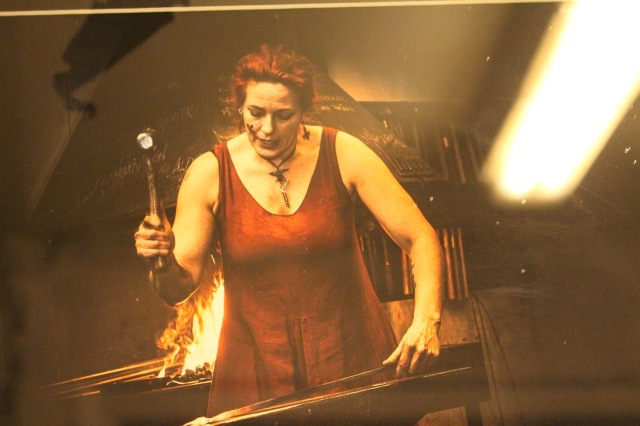 This is a photo of a photo of Therese in action, on display in the shop. She did embark on a formal education in the art of blacksmithing, but eventually found that the schooling lacked some fundamental elements of what she wanted to learn. She returned home to an apprenticeship with her father, who also was a Master Blacksmith. She became a Master Blacksmith in 2004, and has won several Nordic championships in forging. 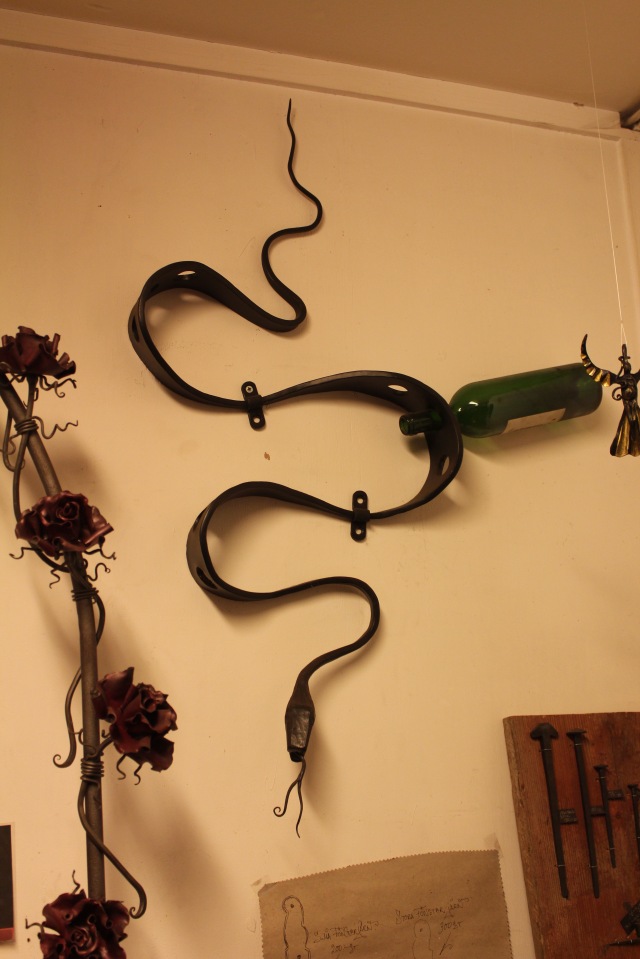 This has got to be one of the coolest wine racks I have ever seen! Beside it, iron roses are climbing up a trellis which was created for the occasion when the happy couple were married. This wonderful web page tells the tale of their wedding. There were 18 roses adorning the trellis – one for each year that passed before Niclas proposed to Therese. There were roses in the wedding bouquet, as well – beautiful! 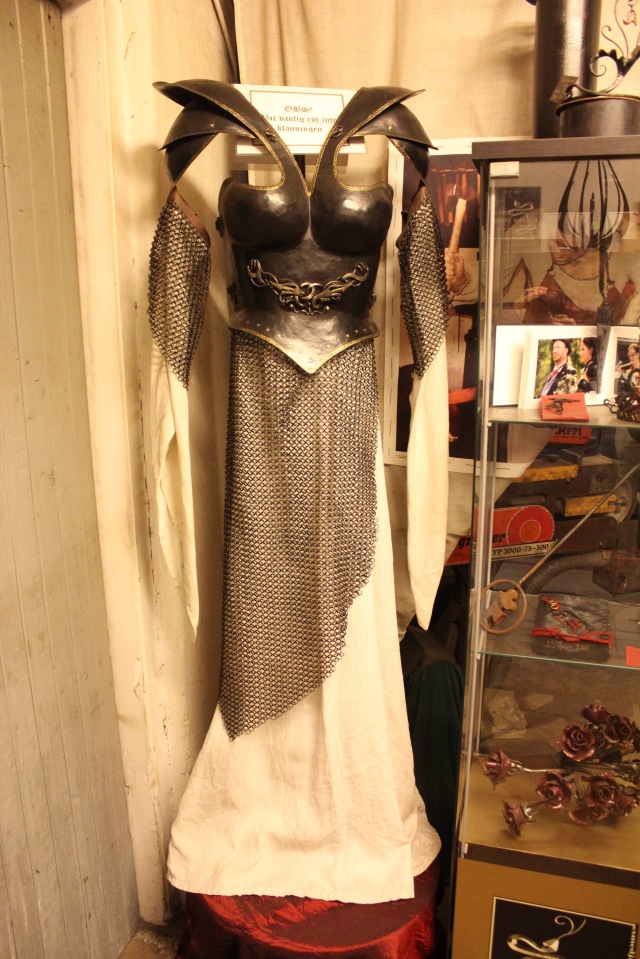 A forged wedding dress was Therese’s journeyman work. She started it before she met her husband to be, whom she married 19 years and two kids later. What’s almost as stunning as the dress itself, is that – after all that – she still fit in to it!!! Wow… that’s impressive! 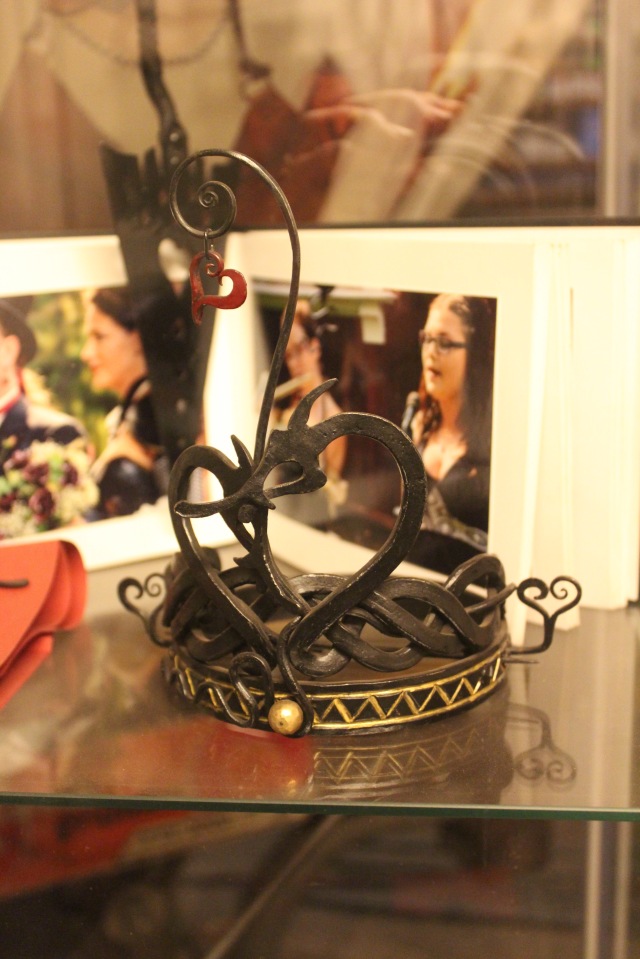 This was the bridal crown, complete with serpents and hearts. Both dress and crown are on display in the studio, but be sure to click on the link to see the full story. Granted, it’s in Swedish, but the photos are marvelous, and will tell you a tale of love and family, deep commitment, and symbolic expression. 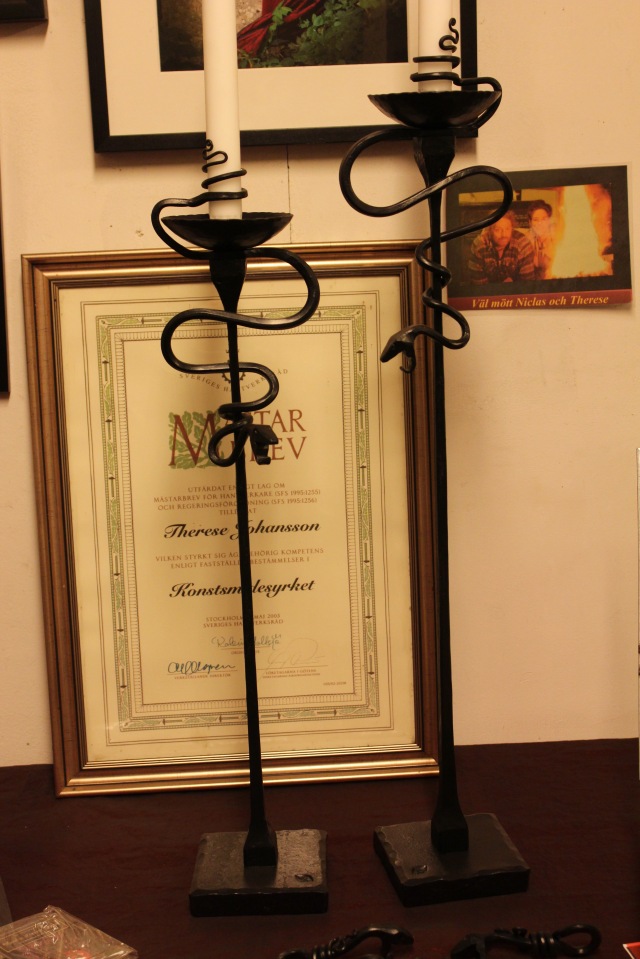 The snake – a universally powerful symbol representing strength, wisdom, healing and power – has become Therese’s trademark. Its graceful movements is manifested in many of the objects on display. I laughed, because I have such an innate, irrational fear of snakes. My fear is ridiculous to the point of me thinking that I must have been a mouse in a previous life, that met my fate in a reptile encounter. In that regard, Therese is my exact opposite – she seeks them out! Behind the candle holders, is her coveted Master Blacksmith certification, framed. 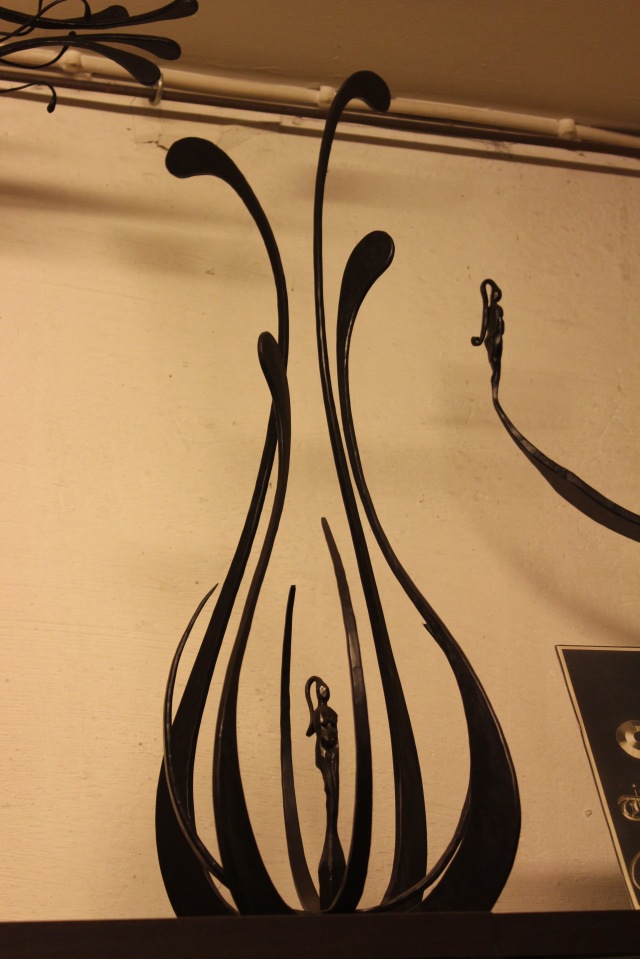 Her work spans the functional to the purely decorative. 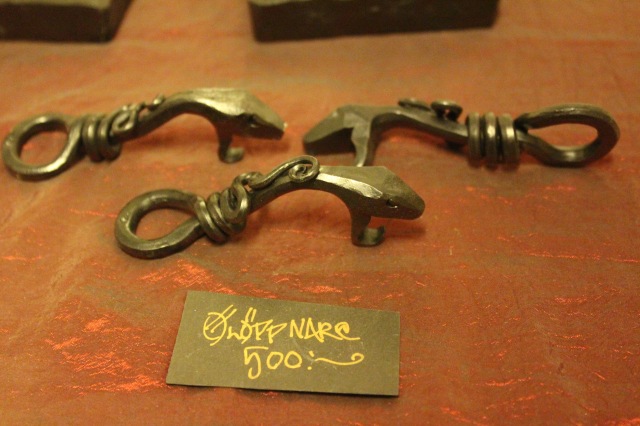 These bottle openers are fabulous! 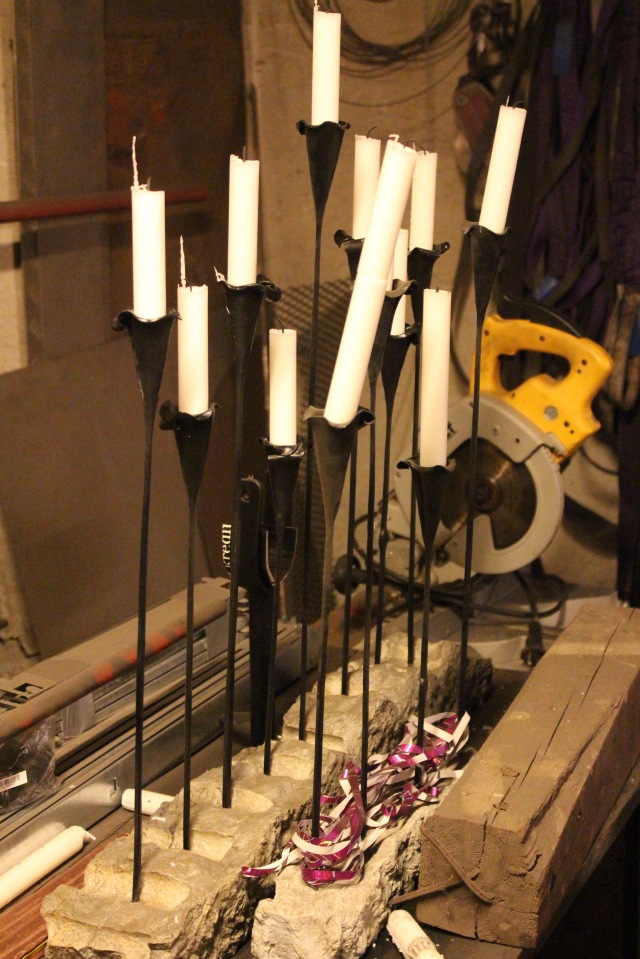 These Calla lily candle holders are set in a slab of lime stone, representative of the region’s geology. 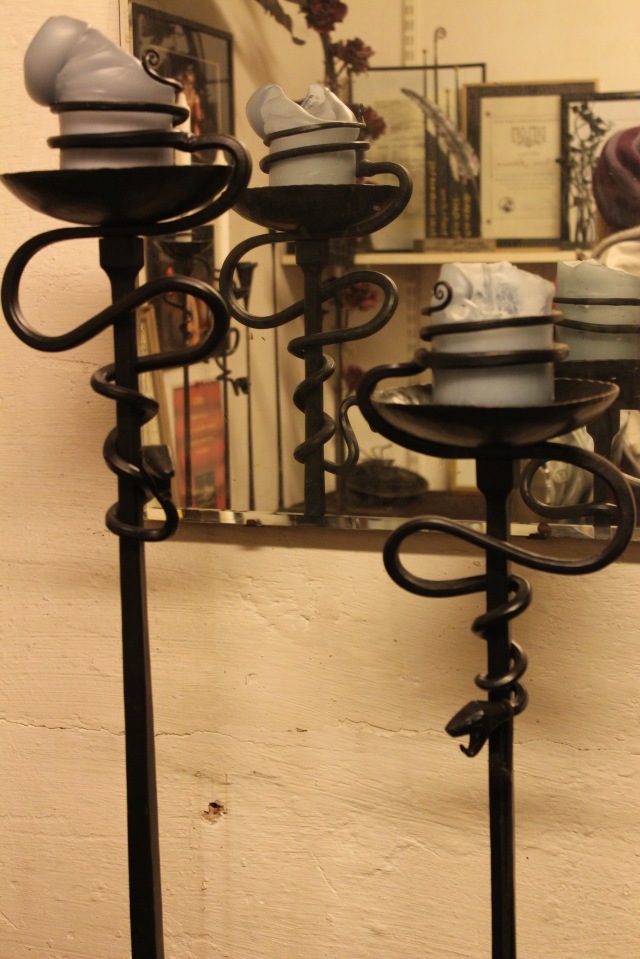 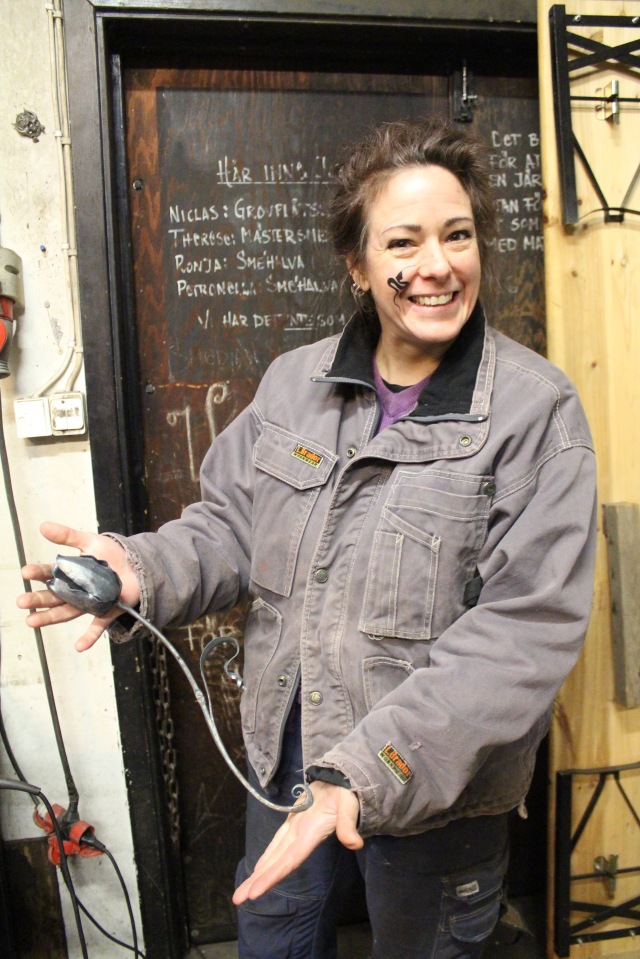 She also makes these wonderful, delicate flowers with detailing that defy the hardness of the iron. You saw the roses up above – this is a tulip. 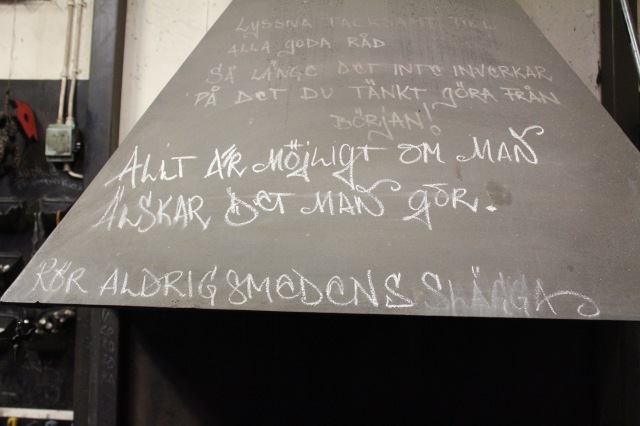 Another few words of wisdom: “Gratefully accept advice, as long as it doesn’t affect what you were planning to do to begin with”. And this one: “Anything is possible if you love what you do.” Beneath it, a gentle warning: “Do not ever touch the smith’s hammer”. Fair enough… if there is anything I wish for my kids, it is for them to pick a path that will bring them as much enjoyment and bliss as possible. I truly believe doing something you love is the key to happiness! 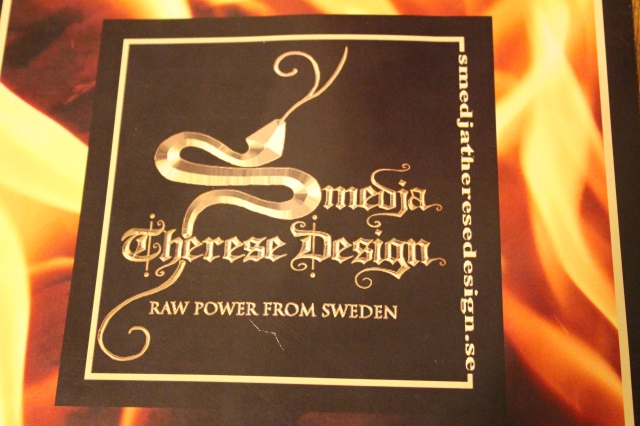 Before we left, I offered to see if I could find anyone over here in Portland, to sell her work.  Therese gave me some marketing collateral, pricing sheets, and business cards to take home. “Raw power from Sweden” the logo says – we need some of that over here, I think. I’m not much of a shopper, so if any of you can think of a boutique over here that would be a good fit, and who might be interested in her work, please let me know, and I will contact them. I’m exploring a few ideas already,  but this stuff is so cool, it needs to be a perfect fit, wouldn’t you agree? So, holler if you have ideas, would you please? 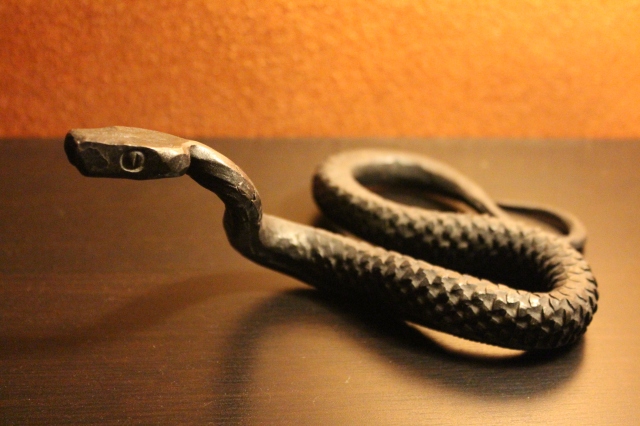 In parting, I figured I’d include a photo of my very own iron snake, since this  is a rather snake-heavy post. I bought it years ago, after having survived an internship with the US Park Service, where I spent three months measuring abandoned historic buildings. There were snakes all over the place, and I was a nervous wreck. When the internship was up, I found this little guy in a gallery. I realized that he – better than anything else – would be a good souvenir to remember my rather unforgettable three months in Snake Country by. I felt like I had grabbed my phobia by the fangs. Since then, I have actually grown to like him quite a bit! 🙂

I was born and raised in Sweden, By now, I have lived almost as long in the United States. The path I’ve taken has been long and varied, and has given me a philosophical approach to life. I may joke that I’m a sybarite, but the truth is, I find joy and luxury in life’s simple things as well. My outlook on life has roots in a culture rich in history and tradition, and I care a great deal about environmental stewardship. Aesthetically, while drawn to the visually clean, functional practicality and sustainable solutions that are the hallmarks of modern Scandinavia, I also have a deep appreciation for the raw, the weathered, and the worn - materials that tell a story. To me, contrast, counterpoint, and diversity are what makes life interesting and engaging. Color has always informed everything I do. I’m a functional tetrachromat, and a hopeless plantoholic. I was originally trained as an architect working mostly on interiors, but soon ventured outside - into garden design. It’s that contrast thing again… An interior adrift from its exterior, is like a yin without a yang. My firm conviction that everything is connected gets me in trouble time and time again. The world is a big place, and full of marvelous distractions, and offers plentiful opportunities for inquiry and exploration. I started writing to quell my constant queries, explore my discoveries, and nurture my curiosity. The Creative Flux was started in 2010, and became a catch-all for all kinds of intersecting interests. The start of Flutter & Hum at the end of 2013 marks my descent into plant nerd revelry. I occasionally contribute to other blogs, but those two are my main ones. For sure, topics are all over the map, but then again - so am I! Welcome to my blogs!
View all posts by annamadeit →
This entry was posted in Nice People, Scandinavia and tagged bridal crown, forge, heart, master blacksmith, Raw power from Sweden, rose, sculpture, snake, Swedish, Therese Engdahl, wedding dress. Bookmark the permalink.

6 Responses to Do what you love, and success will follow