Tangerine Tango for a Garden Geek 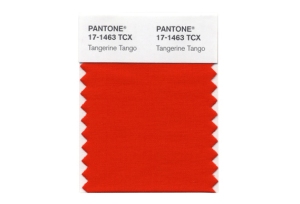 Okay, so the color gurus at Pantone have declared a color they call ‘Tangerine Tango’ the color of the year for 2012. This is good news for me – I happen to be very fond of fiery, reddish orange colors! My very small garden contains several good candidates for a Tangerine Tango pageant, and I’d be hard pressed to shoe horn in yet another one, but it’s always fun to look…. right? So, the other night, I amused myself by scouring the Internet for photos of not only the ones I have, but also others that fit the bill – or close to it. I focused on flowers, but really – this color is abundant in the fall colors of so many trees and shrubs. Several barberries, fothergillas, smokebush are only a few examples. Maples go without saying, and I have long drooled over the ever-changing color display of the beautiful Katsura. But hey, flowers it is… With a little planning, you can enjoy the energizing burst of this mesmerizing color throughout the year if you’re so inclined!

Rhododendrons are often big and bulky. To be allowed in my garden, they have to really earn their spot. I only have one of these, but they are both beautiful and the color is sumptuous; R. ‘Fireball’ and R. prunifolium. 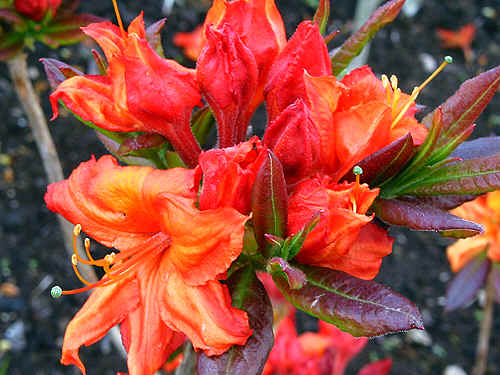 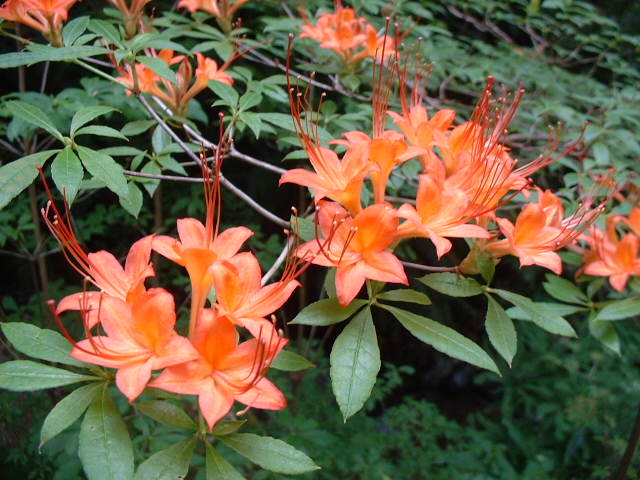 Alongside the Rhodies, there are usually tulips. Oh, how I love tulips! ‘Princess Irene’ with its darker, purplish streaks is lovely, and the elegant, lily-shaped ‘Ballerina’ are both tucked into my crowded flower beds. 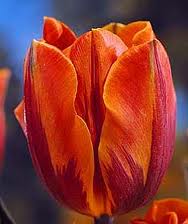 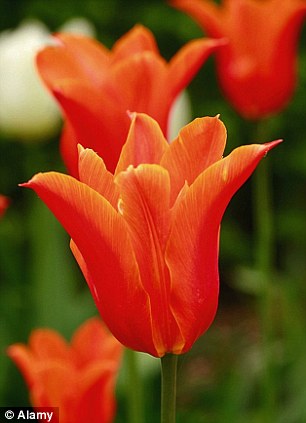 Another relatively early beauty in my garden is our own native Oregon Lily. With its nodding turks caps and spotted markings, it makes my heart beat a little faster when it unfolds. It’s a patient, humble type and not at all a primadonna. Au contraire, if it’s happy, it will multiply! 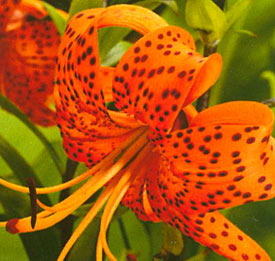 I confess to having a soft spot for lilies of all kinds. Although I usually prefer the ones with a fragrance, there are several great Asiatics on this side of the spectrum that will brighten your botanical collections and bouquets in summer. I planted a few varieties last year. Fingers crossed that they return! 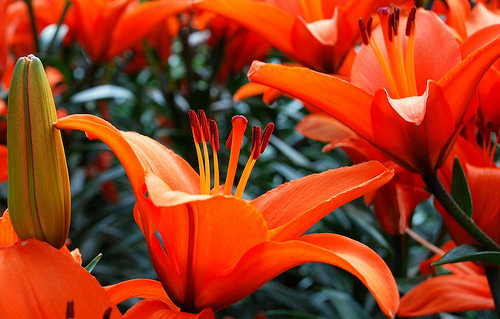 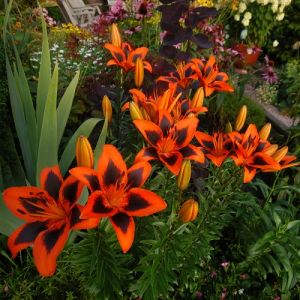 Although I appreciate them for what they are, I’m not generally a rose fanatic – which is almost something you don’t admit to when you live here in the City of Roses. To make it into my very modestly sized city lot, heavenly fragrance is most definitely a requirement. However, I’m making a rare exception for this one. There is something maddeningly intriguing about the ‘Hot Cocoa’ rose. I got mine when the new owner of a house near where I worked, tore out an entire rose garden in a giant free-for-all. Two were labeled ‘Hot Cocoa’. I thought the name was funny, and grabbed them with the intention of checking them out later. A quick internet search brought high praise and all kinds of accolades, so I kept them – despite the fact that they don’t have much of a fragrance. They have never disappointed me. As they age, their colors transforms into a smokey kind of orangey pink. They are absolutely delicious and great for bouquets! 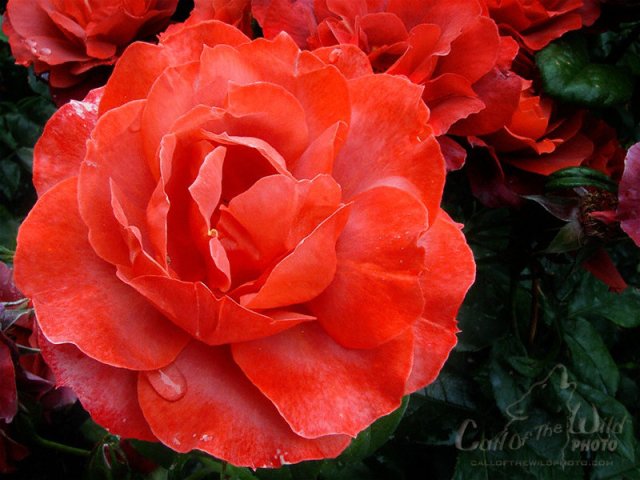 A little later in the summer, the Calla lilies show up. I have heard some people say that they remind them of funerals, but I don’t get that feeling at all. I agree wholeheartedly with Georgia O’Keefe and Robert Mapplethorpe that they are indeed stunning, and well worthy of a closer look. At a garden show earlier this year, I bought a couple of bulbs of an orange variety. They probably should have gone in the ground by now, but I haven’t had time to widen a bed for either them or the other things I bought. Humbling as it is,  for my inner eye I can see a never-ending assortment of temporary pots containing half-dead contenders, littering my garden in the months to come. Of course, I should have known better than to buy more, but what’s a plant addict to do? Really, mine is a fairly benevolent affliction, as far as addictions go… Still, if there was a Humane Society for Plants, I’d probably be on their s*** list. 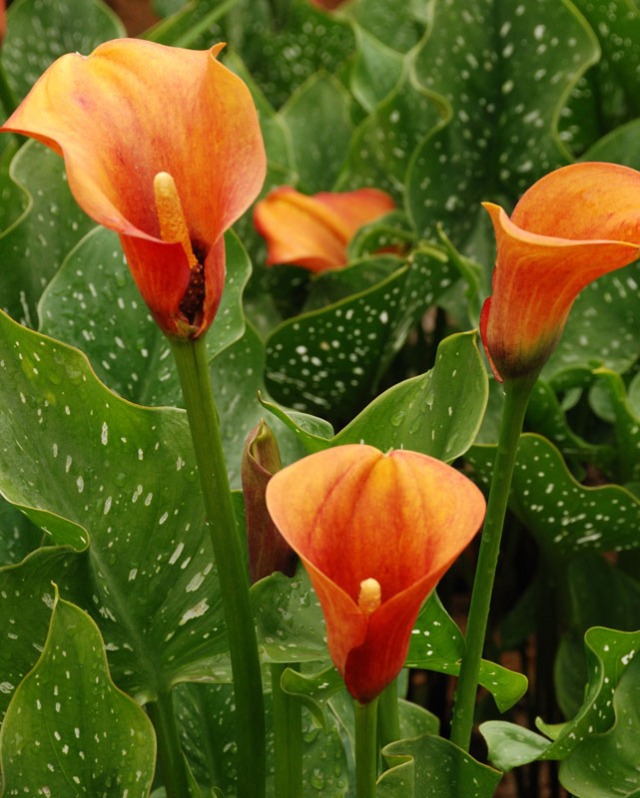 At about the same time as the Callas, the Canna lilies start their show. Here in Portland, it lasts until at least September. There are several varieties that display the color of the year, but truth be told – I think the real reason to grow Cannas is their foliage. Whether they are black, stripy or green, they are large and showy and go a long way toward creating a lush tropical feel in your garden. Add a clump of Cannas for phenomenal texture! Just check out the leaves of Canna Tropicana below! 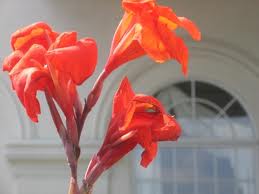 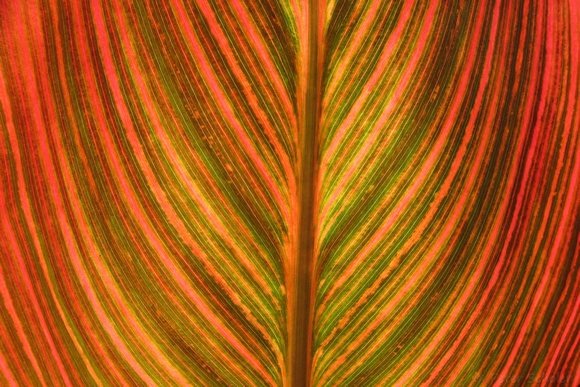 Dahlias also help carry the later summer show. Although I do not have any, I always enjoy the sculptural variety of their flower heads. The one in the photo is appropriately called ‘Tangerine Dream’. I think it’s pretty cool, and vainly wish my garden was bigger. 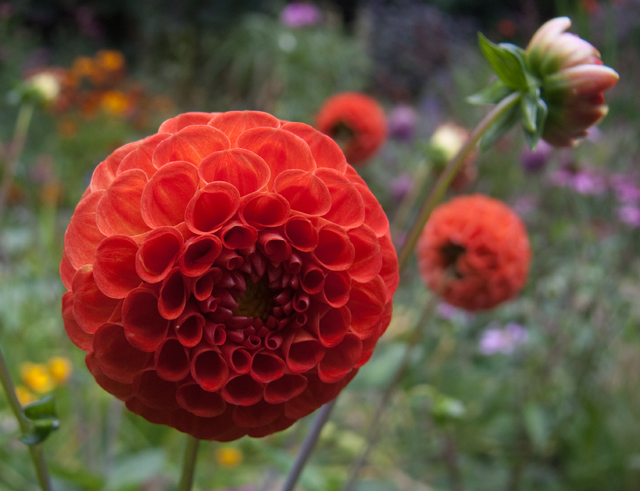 I do have some Crocosmia ‘Lucifer’, but wouldn’t mind adding C. ‘Ember Glow’ to the mix. Crocosmias are great for bouquets and the hummingbirds love them! They are drought tolerant,  faithfully return (and multiply!) each year, and stand up to my abuse, so what’s not to like? Another drought tolerant beauty is Kniphofia ‘Nancy’s Red’. As the world’s water supplies diminish, we’d probably all do well to keep some of these around. 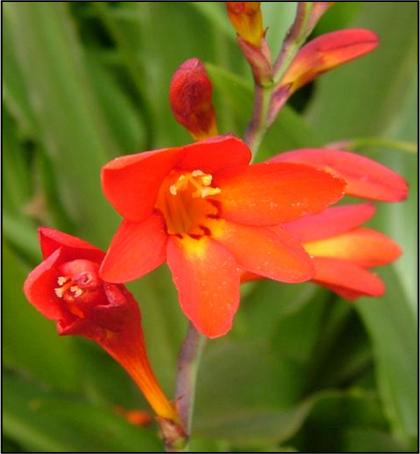 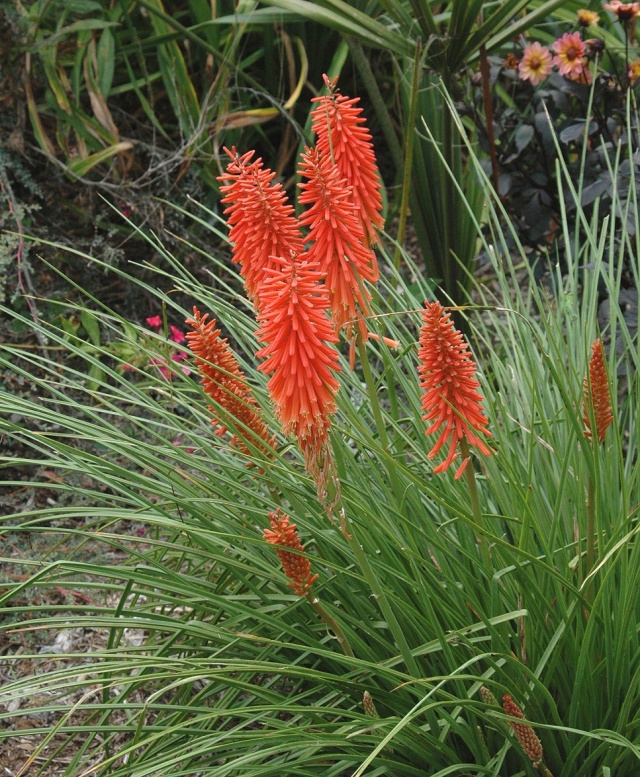 As for beneficial insects, if you like bees and butterflies, plant and Echinacea, or two, or three… or more! My current favorite is one called ‘Cherry Brandy’ – a dual colored stunner which is not really tangerine, but I’m including it here anyway, because it is so cool. My hunch is that it would look great combined with the ‘Hot Cocoa’ rose, as it picks up on the smokey, orangey pink I mentioned earlier. In my search, I also found a variety called ‘Tangerine Dream’ – just like the aforementioned Dahlia. There are probably plenty more brightly colored flowers with that name. Bet you that German synth band had no idea what they started! There is another really intriguing Echinacea called ‘Hot Summer’ on the market. It fades from an orangey yellow, to orange, to a pinkish red with age, adding a lot of pizzazz to wherever it’s planted. I just spec’d it for a dry, sunny spot in my mother’s garden. She lives where either deer and Japanese beetles heartlessly consume almost every blooming thing. I paired it with, among other things, the beautiful dark purple-blue of Salvia ‘Caradonna’. Not 100% positive about the beetles, but the planting should at least survive the deer. 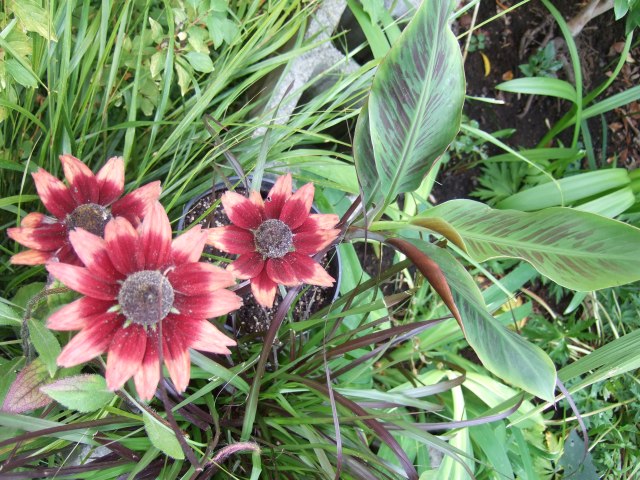 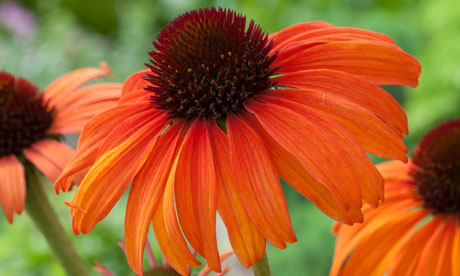 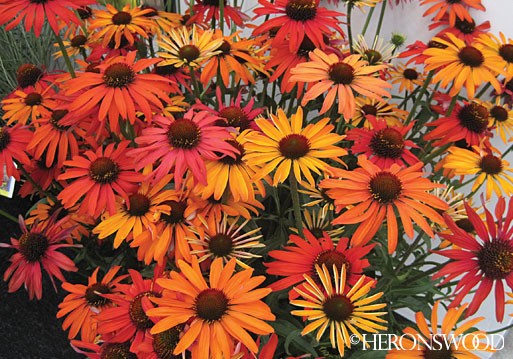 A great trick when your play area is small, is to go vertical. Believe me, I have. My clematis addiction has very nearly exhausted my supply of good vertical spots. I have yet to add a trumpet vine, but find this ‘Madame Galen’ exceptionally tempting. It is supposed to bloom all summer long, and – again – the hummingbirds love it! I’m going to have to think seriously about this, while cautiously keeping in mind that they reputedly tend to take over… 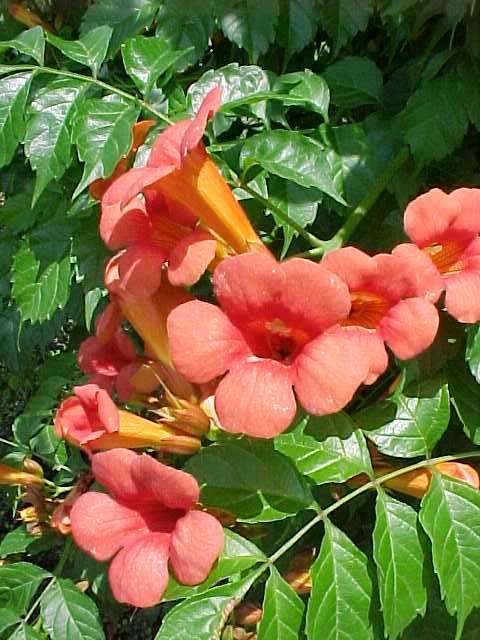 The Kaffir Lily, or Clivia miniata ‘Belgian Hybrid Orange’ is a tender beauty that probably would not survive the winter in my growing zone (8). Well, maybe it would – in a sheltered location with lots of mulch… I suppose I could treat it like my Amaryllis. It lives outside during the summers, but joins us on the inside when it gets cold. Would probably be well worth it, if I only had room. It’s lovely, for sure! 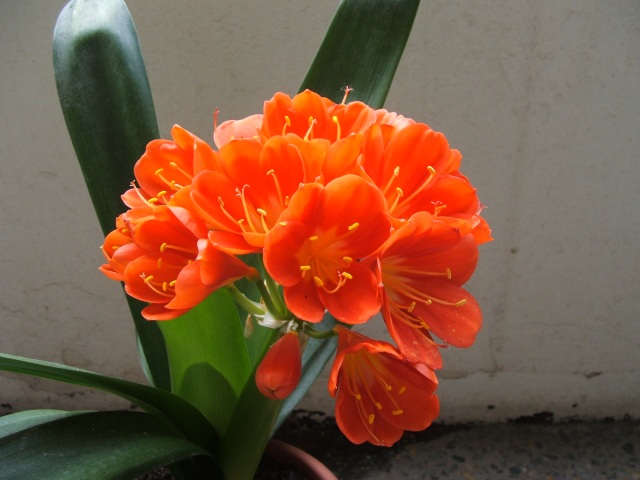 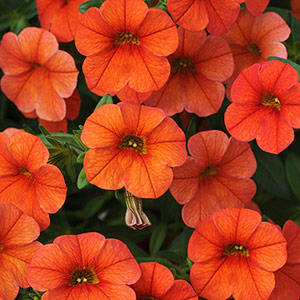 Finally, a great candidate for fun container combos; Calibrachoa ‘CanCan’. A relative of petunia, it has smaller flowers and is reportedly “self-cleaning”. I can just imagine it spilling over the container edges around some dark, sculptural focal point – like a dark New Zealand Flax, with a few other contrasting textures to set it off. This container challenge could be really fun. Somehow, I never seem to get around to creating a stunning container before the summer is almost gone. But maybe, just maybe, this year I will. We’ll see…

I was born and raised in Sweden, By now, I have lived almost as long in the United States. The path I’ve taken has been long and varied, and has given me a philosophical approach to life. I may joke that I’m a sybarite, but the truth is, I find joy and luxury in life’s simple things as well. My outlook on life has roots in a culture rich in history and tradition, and I care a great deal about environmental stewardship. Aesthetically, while drawn to the visually clean, functional practicality and sustainable solutions that are the hallmarks of modern Scandinavia, I also have a deep appreciation for the raw, the weathered, and the worn - materials that tell a story. To me, contrast, counterpoint, and diversity are what makes life interesting and engaging. Color has always informed everything I do. I’m a functional tetrachromat, and a hopeless plantoholic. I was originally trained as an architect working mostly on interiors, but soon ventured outside - into garden design. It’s that contrast thing again… An interior adrift from its exterior, is like a yin without a yang. My firm conviction that everything is connected gets me in trouble time and time again. The world is a big place, and full of marvelous distractions, and offers plentiful opportunities for inquiry and exploration. I started writing to quell my constant queries, explore my discoveries, and nurture my curiosity. The Creative Flux was started in 2010, and became a catch-all for all kinds of intersecting interests. The start of Flutter & Hum at the end of 2013 marks my descent into plant nerd revelry. I occasionally contribute to other blogs, but those two are my main ones. For sure, topics are all over the map, but then again - so am I! Welcome to my blogs!
View all posts by annamadeit →
This entry was posted in Color, Cool plants, Gardening and Landscaping and tagged color of the year 2012, fiery color, flowers, foliage, garden, orange, Tangerine Tango. Bookmark the permalink.

3 Responses to Tangerine Tango for a Garden Geek