Iris confusa a.k.a. Bamboo Iris – one of my absolute Top Ten garden picks for spring! 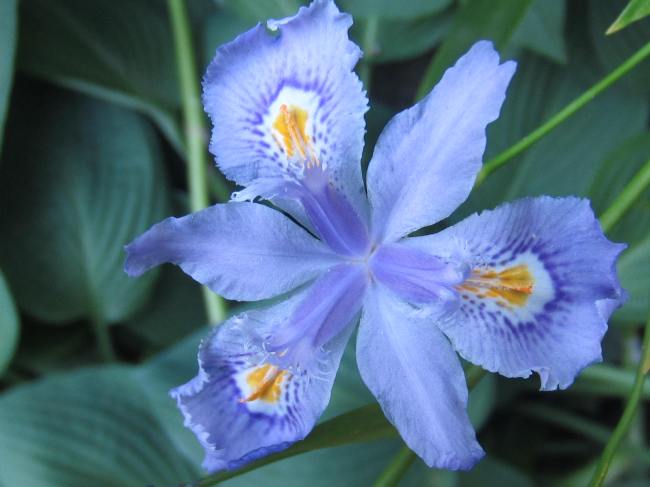 And almost any other time as well, for that matter… Of all the worthy possibilities out there, there are a few that take the cake! Solidifying the shortlist is probably beyond me, hopeless plantoholic as I am, but this one is surely and solidly on there! I first spotted it at the Lan Su Chinese Garden in Portland several years ago. I don’t even think it was in bloom at the time, but based on foliage alone, I decided right then that I needed to get one. When opportunity arose a few years ago, I pounced! 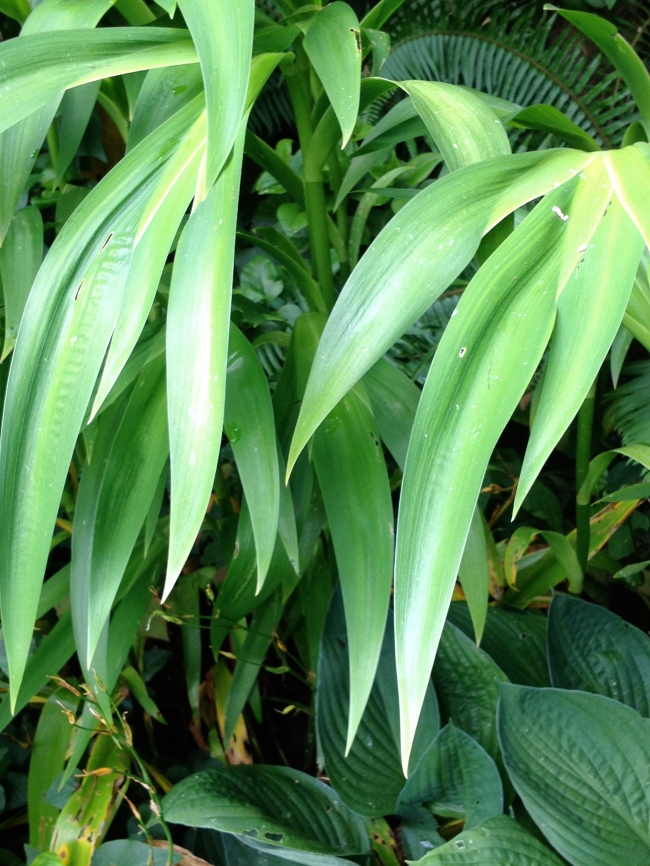 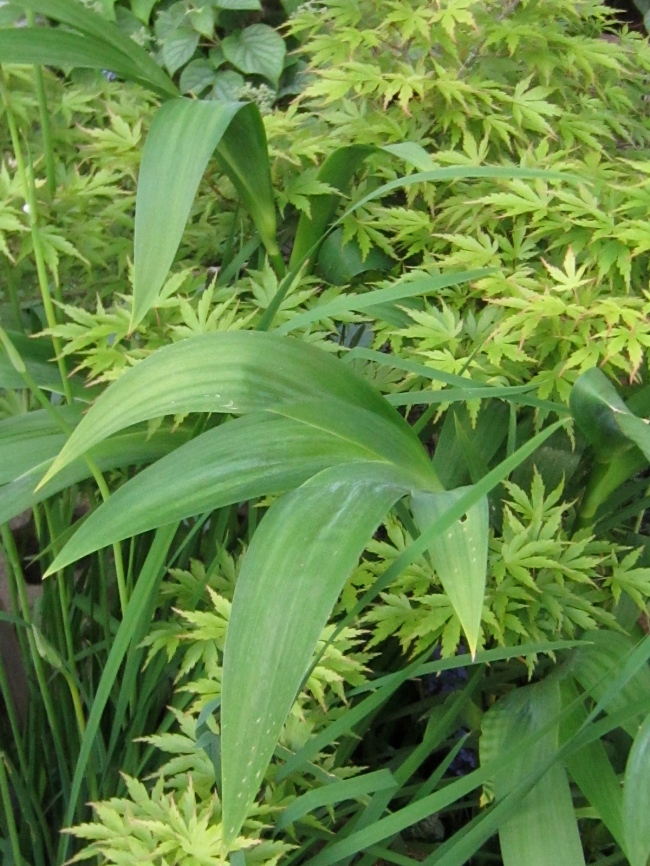 Rarely has a plant made itself so all-around useful. And it truly has become the plant that keeps on giving – both to me, and to willing and grateful friends. Iris-style, it kindly spreads through rizomes – not in an invasive way, but quickly and frequently enough to feature in multiple spots around the garden. It sends out shoots bamboo style, which makes it easy to divide. This, in addition to its culm-like stalks, is probably the reason for its common name. And maybe for its Latin name too. Its hybrid appearance may be forgiven for causing some confusion as to its origins. Is it a bamboo, or is it an iris? Its leaves resemble those of many other irises, except they arch in a gentle, elegant curve instead of pointing sky-ward. In the beginning, that is what you see – arching fans of foliage that hang in a relaxed way, like a hand over an armrest. Alone, or growing through other foliage, they look spectacular!

It took me a while – actually a few rather harsh, un-protected winters, followed by a mild one, to realize that the flowers seem to develop out of the previous year’s leaves. You see, out of this original “hand” the flowerstalk is formed. Although it flowered for me every year since I got it, it wasn’t until after this year’s relatively balmy winter that I truly saw what it can do. After the colder winters, I had done some clean-up, removing the most wind-whipped and ratty looking of the “hands”, and clipping the somewhat ungangly bamboo-like leaf stalks back. Big mistake! I will leave unsaid whether flowers will form even on a badly frost-bitten “hand”. But, trust me, I will not cut them back again until I know for sure! This spring’s display went far beyond what it had ever done before And I’m pretty sure that has always been my fault, for being too clipper-happy in my spring cleaning frenzy. 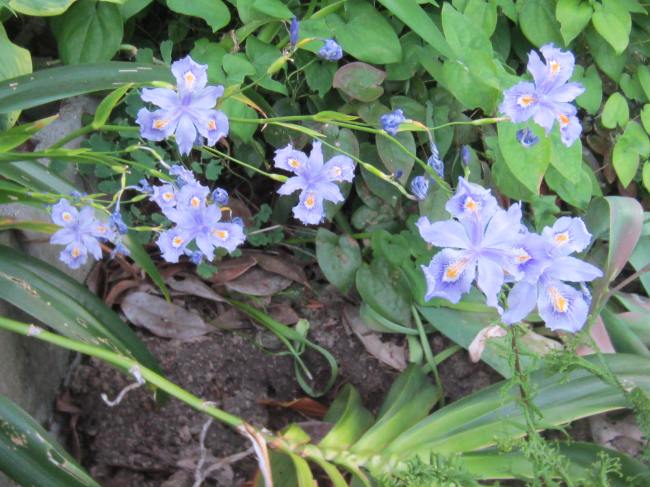 Here you can clearly see the bamboo-like leaf stalk. Cut them down once the flowering is over – they are kind of unruly!

The first time I saw the flower, I delighted in the fact that it almost resembled an orchid. A dainty, beautiful, light violet-blue with white and yellow peacock eyes (signals, I believe they are called) on the falls. So very pretty! I think they come in white as well, but I love my purple one! Each flower only lasts for one day, but there are so many buds on each stalk that there is an abundant supply for weeks. It is May 10th as I write this, and all of them have been flowering since mid-April, although by now, they are starting to slow down. Why not more people have this in their gardens is a mystery to me! They make great cut flowers too. Nothing more simply elegant than a stalk or two in a fluted vase!

I was always under the impression that the Bamboo iris likes dappled shade (because that is how I first saw it) but as it has multiplied, I’ve tried it in many different light conditions and exposures. It seems do do just fine everywhere in my Zone 8b garden, hot sun or northside shade. It doesn’t really seem to be picky about moisture either, which is great during our arid summers. If anything, they might be a bit more upright in the brighter spots. There is a lot to be said for how the flowers practically glow in a dark area, though. I have the mother of all my cuttings  cascading over a wall in a semi-shaded corner. I think this is how it looks its best. For as lovely as they are, they are about as far from primadonnas as they come. Which is good, or they and I probably wouldn’t get along so well! As it happens, like a good friend, they brighten my day whether in bloom or not.  No confusion about that!

I was born and raised in Sweden, By now, I have lived almost as long in the United States. The path I’ve taken has been long and varied, and has given me a philosophical approach to life. I may joke that I’m a sybarite, but the truth is, I find joy and luxury in life’s simple things as well. My outlook on life has roots in a culture rich in history and tradition, and I care a great deal about environmental stewardship. Aesthetically, while drawn to the visually clean, functional practicality and sustainable solutions that are the hallmarks of modern Scandinavia, I also have a deep appreciation for the raw, the weathered, and the worn - materials that tell a story. To me, contrast, counterpoint, and diversity are what makes life interesting and engaging. Color has always informed everything I do. I’m a functional tetrachromat, and a hopeless plantoholic. I was originally trained as an architect working mostly on interiors, but soon ventured outside - into garden design. It’s that contrast thing again… An interior adrift from its exterior, is like a yin without a yang. My firm conviction that everything is connected gets me in trouble time and time again. The world is a big place, and full of marvelous distractions, and offers plentiful opportunities for inquiry and exploration. I started writing to quell my constant queries, explore my discoveries, and nurture my curiosity. The Creative Flux was started in 2010, and became a catch-all for all kinds of intersecting interests. The start of Flutter & Hum at the end of 2013 marks my descent into plant nerd revelry. I occasionally contribute to other blogs, but those two are my main ones. For sure, topics are all over the map, but then again - so am I! Welcome to my blogs!
View all posts by annamadeit →
This entry was posted in Cool plants, Gardening and Landscaping and tagged Bamboo iris, drought-tolerant, favorite, garden, Iris confusa, Plants, plants for sun, shade plants, Top Ten, versatile. Bookmark the permalink.

16 Responses to Iris confusa a.k.a. Bamboo Iris – one of my absolute Top Ten garden picks for spring!