Posted on September 8, 2013 by annamadeit

We got out of our cars less than a minute after we left Heronswood, stretched our travel weary limbs, and began exploring the offerings of Celestial Dream Gardens.

Jeff with the cool earring showed us around his domain, answered questions and pointed out the real treasures.

I decided I had to have a Voodoo lily, with the spotty stems and fabulous leaves.

Alison and Laura trying hard to restrain themselves in one of the greenhouses. 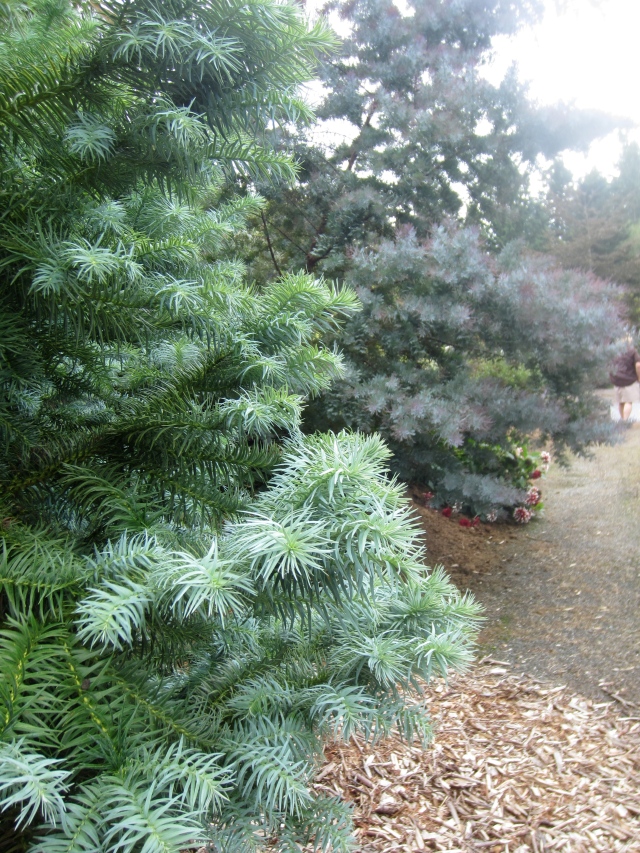 This nursery sported some of the coolest foliar textures…

… as well as some groovy old trucks. 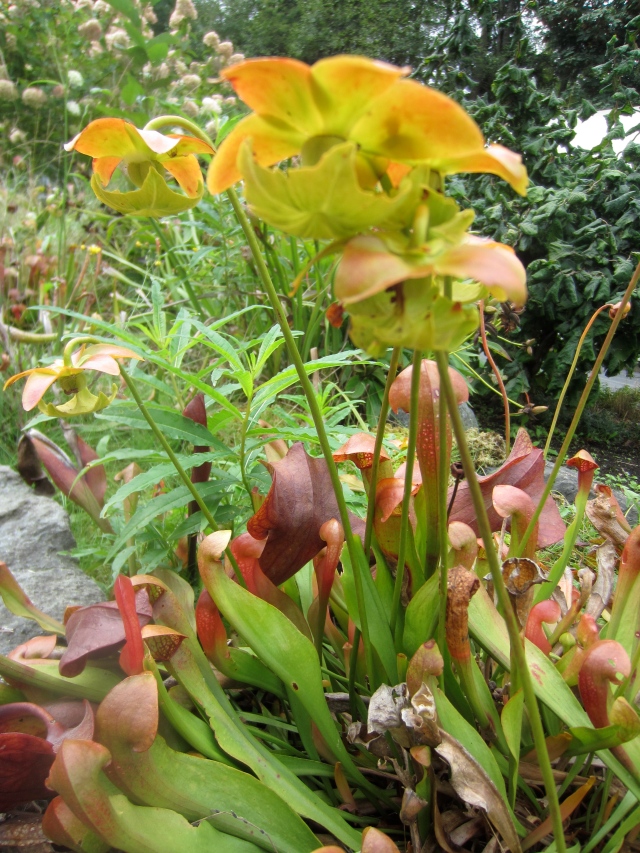 … and I couldn’t help but wonder if the juxtaposition of them next to the peony was intentional. I loved how well the spent seed heads of the peony go with the reptilean forms of the carnivorous plants. Way cool!

Celestial Dream’s resident Griffin saw us on our way as we left for our next appointment – WeHoP.

But, alas, we got distracted! A few yards after getting back on the road, we spotted a somewhat amusing sight – a tall, lanky cowboy selling rare plants out of his truck. The sign behind him announced the Kingston Missionary Church, and for a while, I suspected the church was trying to weigh in on the excitement and intense traffic surrounding the Heronswood plant sale. We stopped to investigate.

He couldn’t possibly have known that we were a bunch of potentially rapacious garden bloggers, but as we gathered around his truck, the Cowboy kindly offered to show us his garden which was “just down the road”. We all looked to our fearless leader. After a call to WeHoP informing them we would be a little late, we agreed to stay. I’m so glad we did! Our Cowboy turned out to be Shayne Chandler – another notable plantsman and garden designer extraordinaire. Being guided around his garden by him, for me was the highlight of our trip. (Which incidentally was a trip with a very large number of highlights.)

It turned out to be an absolutely enchanted place, and many plants were accompanied by a travel story. We were all spellbound, and thanking our lucky stars for having been so fortunate.

Amazing bark texture. Just wish I remembered what kind of tree it belonged to. Peter – help me out here… (I saw you photographing it too…)

Fabulous colors and textures in a cool, green, understory setting. 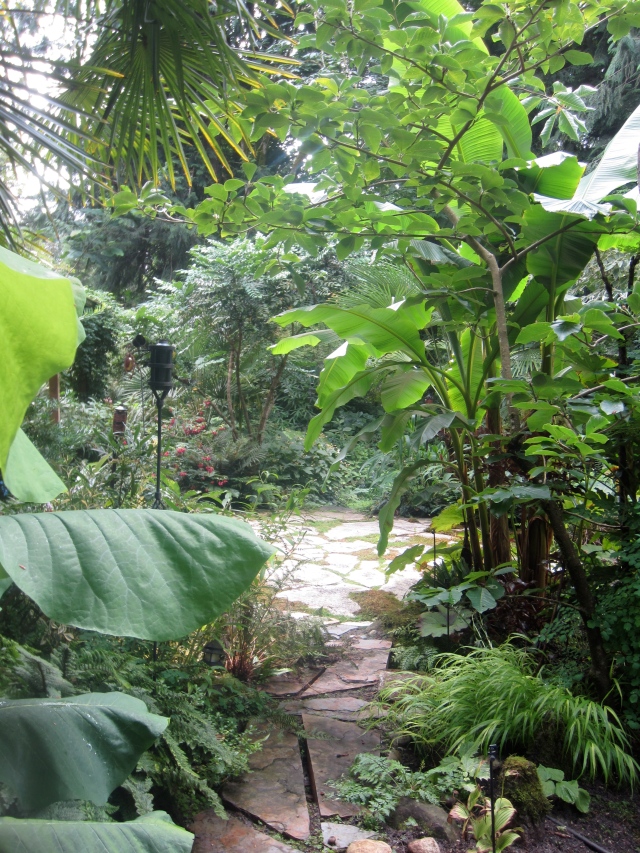 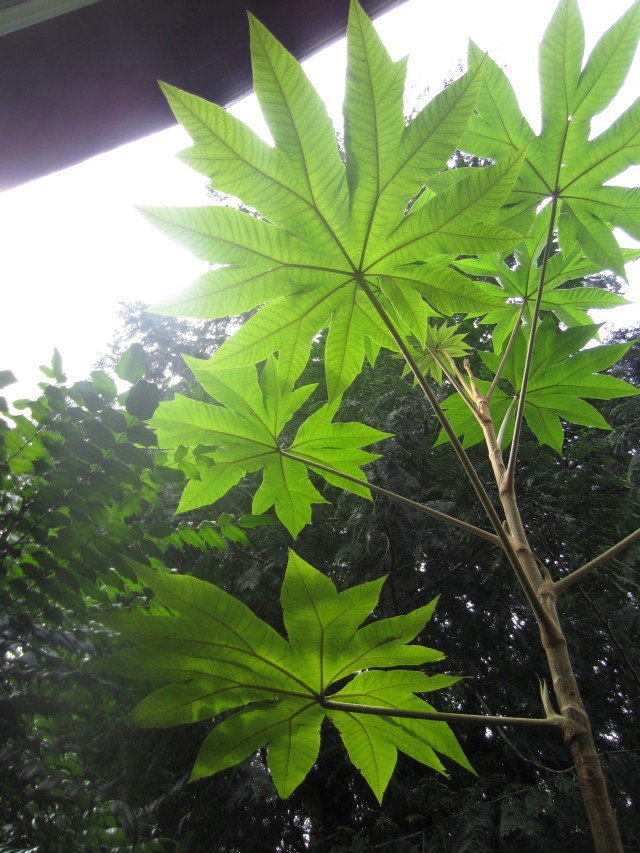 We probably could have lingered quite a bit longer in that amazing setting – it truly was a treat and there was so much to discover. But it was time to go. Sally and Tonya at WeHoP were waiting.

A short while later, we were there. Sadly, being so late in the season, we discovered most of the greenhouses were nearly empty. But Sally and Tonya had plenty to show us. But first lunch!

Imagine our surprise! On two long mahogany planks, they had set up a fabulous smorgasbord of cheeses, bread and crackers, veggies from their gardens and all kinds of yummies. We were not expecting this at all, and truly felt like royalty!

I thought the paths of insects going through the mahogany was beautiful.

After lunch, we wandered through their display garden where potted arrangements of an astounding variety were displayed. During the summers, the City of Poulsbo and Tacoma commissions them to place pots around the city to beautify the urban experience. The concept is only in its second year, but is a huge hit, as you can imagine. Who doesn’t like pretty?

An example of a potted arrangement.

Loree petting a lonesome Grevillea in the greenhouse.

After we said our goodbyes, we headed for Far Reaches Farm, which is where I completely lost all self control.

It was a bit of a drive, but abundant beautiful scenery to lose yourself in. 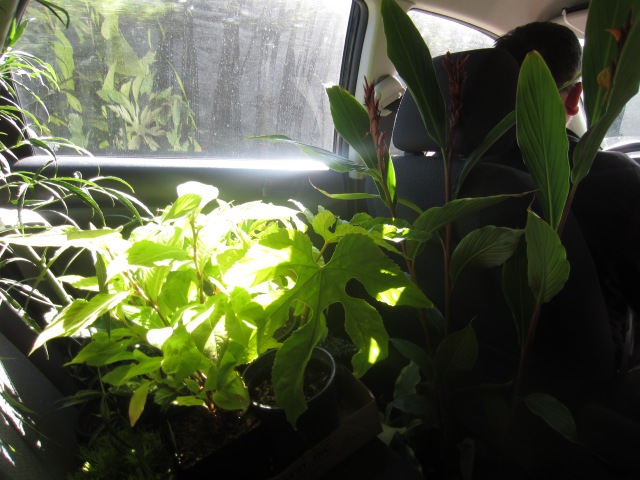 The Pirate was kind enough to drive the entire day. I spent the trip either admiring the views, or gawking at the incredible plants that had joined us along the way. 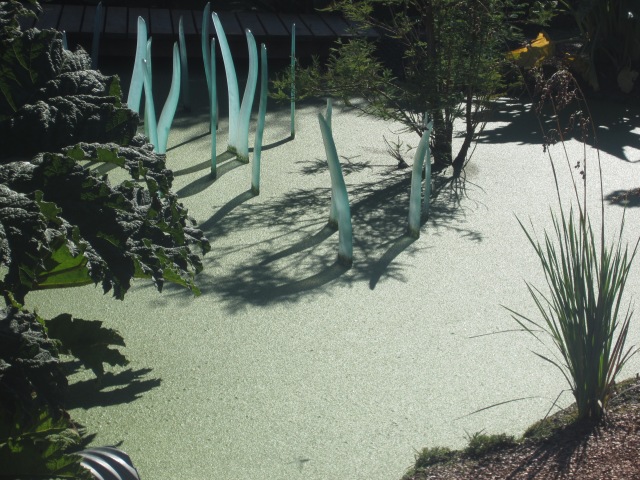 Finally we were there! 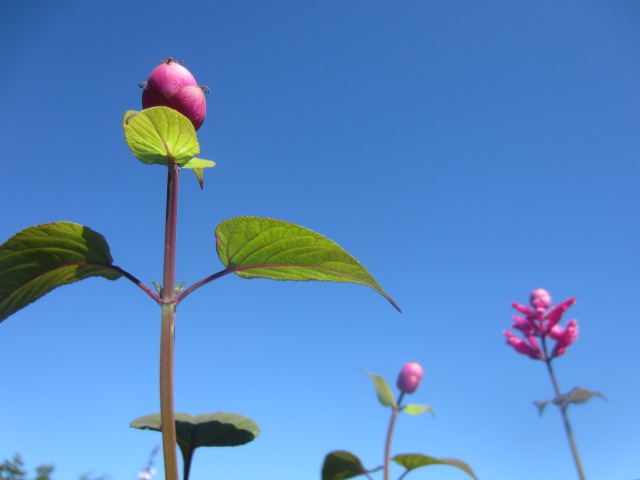 I marveled at the incredible breadth and variety within the Salvia species. Here is a Rosebud salvia. 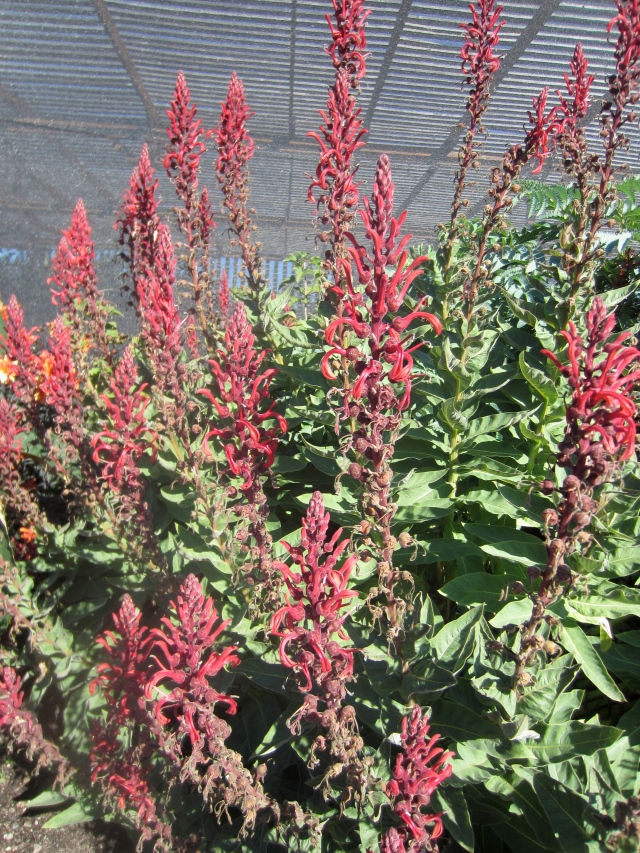 Here is the stately Lobelia Tupa…

… which incidentally looks fantastic in the company of Melianthus. 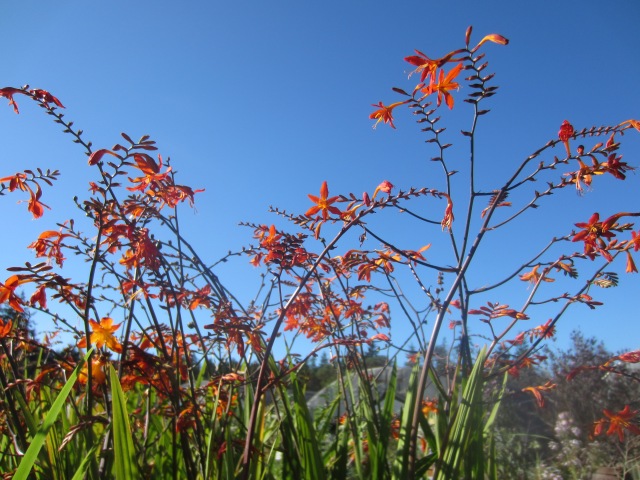 They also sported a fab selection of Crocosmias – a fact I happily stored away for later.

Arms and cars full of plants, we left as they were closing, and headed for our last stop on our radiant day of horticultural revelry – Desert Northwest – as you probably guessed, a nursery focusing on drought tolerant desert plants. 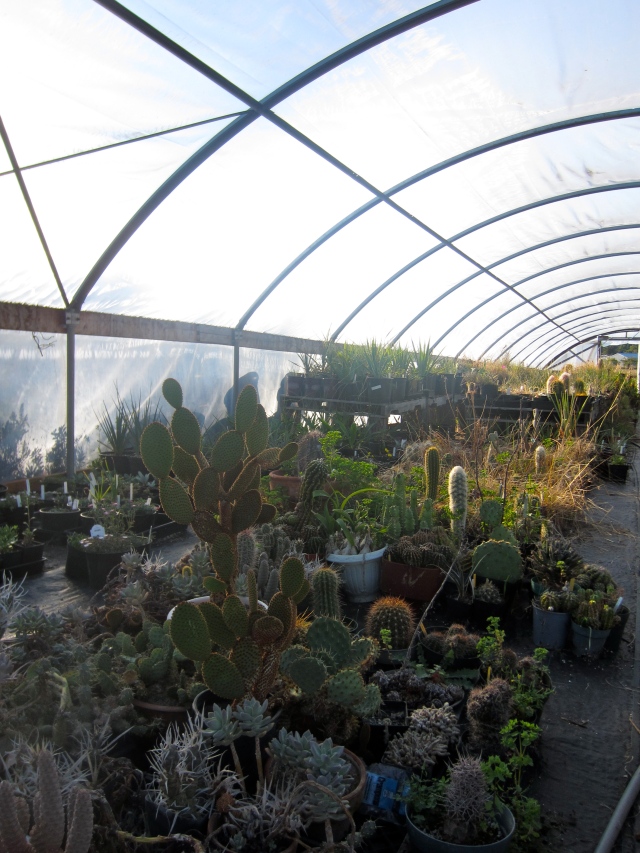 We were shown around by Ian and his son Nigel. Not only did they stay open late for us – they had cold drinks and other refreshments waiting for us when we came. For the second time that day, we felt like royalty.

I learned from Loree that this is not an ailing plant. Its droopy leaves are that way to protect the plant from critters that eat it. Once it grows tall enough to be out of reach, it changes character completely. Fascinating, and kind of humbling too. Plants too have a conscience. 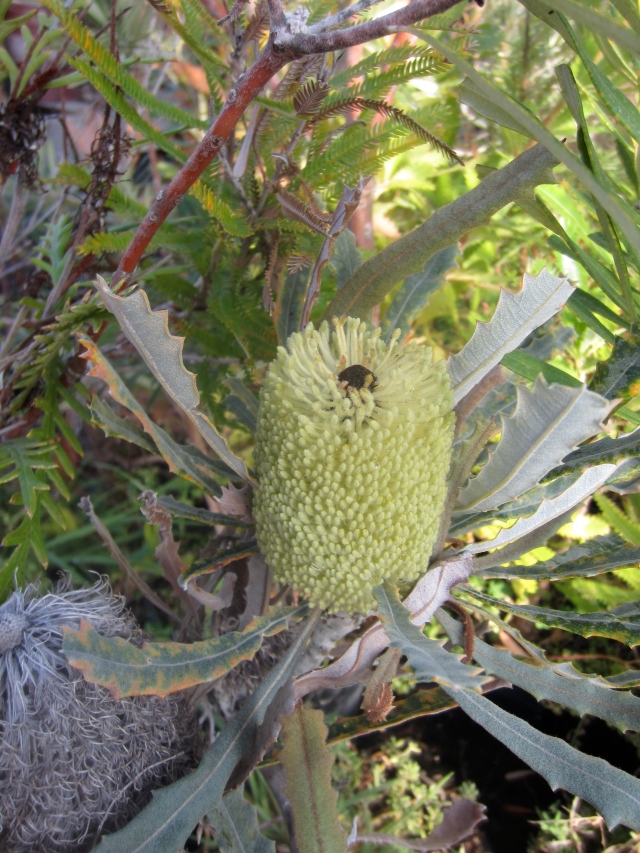 Desert plants have a fantastic array of forms and attributes.

I fell helplessly in love with the Banksias. 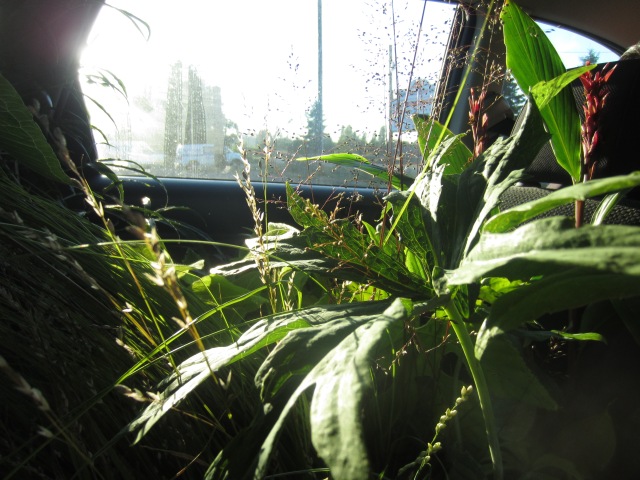 We finally said goodbye, and as the sun was setting, we headed to Snug Harbor Cafe on Ian’s recommendation. By now, we had a crazy number of plants in the car. 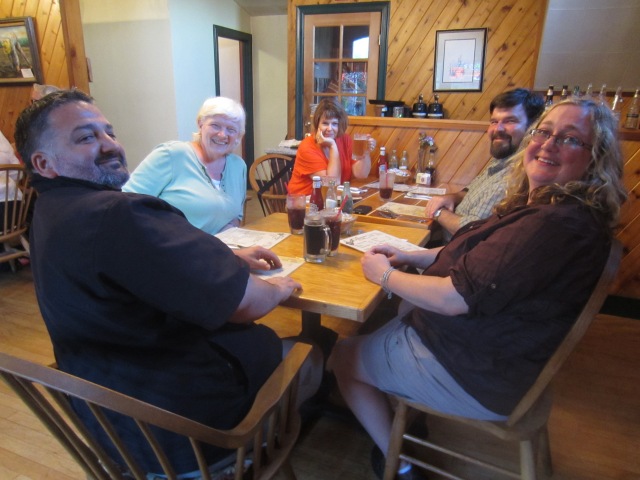 Snug Harbor Cafe is a cozy little place that provided a great ending to a wonderful day.

Part 3 of the WeHoP romp will be devoted to fabulous flower and foliage combinations we encountered on our trip. Stand by…

I was born and raised in Sweden, By now, I have lived almost as long in the United States. The path I’ve taken has been long and varied, and has given me a philosophical approach to life. I may joke that I’m a sybarite, but the truth is, I find joy and luxury in life’s simple things as well. My outlook on life has roots in a culture rich in history and tradition, and I care a great deal about environmental stewardship. Aesthetically, while drawn to the visually clean, functional practicality and sustainable solutions that are the hallmarks of modern Scandinavia, I also have a deep appreciation for the raw, the weathered, and the worn - materials that tell a story. To me, contrast, counterpoint, and diversity are what makes life interesting and engaging. Color has always informed everything I do. I’m a functional tetrachromat, and a hopeless plantoholic. I was originally trained as an architect working mostly on interiors, but soon ventured outside - into garden design. It’s that contrast thing again… An interior adrift from its exterior, is like a yin without a yang. My firm conviction that everything is connected gets me in trouble time and time again. The world is a big place, and full of marvelous distractions, and offers plentiful opportunities for inquiry and exploration. I started writing to quell my constant queries, explore my discoveries, and nurture my curiosity. The Creative Flux was started in 2010, and became a catch-all for all kinds of intersecting interests. The start of Flutter & Hum at the end of 2013 marks my descent into plant nerd revelry. I occasionally contribute to other blogs, but those two are my main ones. For sure, topics are all over the map, but then again - so am I! Welcome to my blogs!
View all posts by annamadeit →
This entry was posted in Cool plants, Gardening and Landscaping, Just for fun, Nice People and tagged Celestial Dreams Gardens, Desert Northwest, Design, Far Reaches Farms, foliage, garden, Kitsap peninsula, nurseries, road trip, Shayne Chandler, WeHoP. Bookmark the permalink.